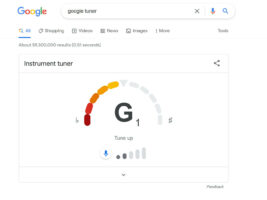 Google adds a built-in guitar tuner to its search function

The Google search engine is filled with built-in tools that immediately pop up to help you as you search. There are well-known ones such as currency converters, weather and timers, as well as more niche ones such as metronomes and graphing calculators. Now, guitarists can access a tuner app just by searching for “google tuner.”.

The chromatic tuner app is cross-platform, meaning you can access it on your phone as easily as on your desktop. However, as The Verge noted, this means that the tuner’s accuracy can vary, depending on your environment and your device’s microphone.
However, this is no different to any other tuner app you might use on a computer or smartphone – you’ll get the best accuracy plugging directly into an interface, but a phone microphone will do the job, as long as your guitar’s loud enough,
While the new tuner from Google is unlikely to get you to ditch the tuner from your pedalboard, it does mean that a tuning app is a lot more accessible for many guitarists.
See the tuning app here.
The post Google adds a built-in guitar tuner to its search function appeared first on Guitar.com | All Things Guitar.