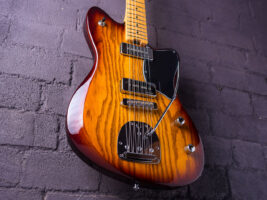 The Gatsby comes in five solid-colour finishes on a poplar body, as well as in two translucent finishes on swamp ash. Both versions feature a maple neck and fingerboard with 22 medium jumbo frets, as well as a brass nut and two-way truss rod.
Electronics include two “home-wound” GS P-90 pickups covered in chrome. Those are routed to a straightforward set of controls that include a three-way pickup selector, along with master volume and tone knobs.
For hardware, the Gatsby comes equipped with a low-profile brass roller bridge matched to a HK41 vibrato system. Meanwhile, its tuners are a set of Gotoh SG381 machine heads. There’s also a custom neck plate to commemorate the launch of the instrument.
Take a listen to the Gordon Smith Gatsby in action below:

Also included with each guitar is a GS Gig Bag, a launch edition certificate and an exclusive Gordon Smith t-shirt. See the available finishes in the gallery below:

The Gordon Smith Gatsby is now available for purchase in poplar at £1,299 or in swamp ash at £1,399.
Learn more at gordonsmithguitars.com
The post Gordon Smith Guitars introduces the Gatsby, its first offset electric guitar appeared first on Guitar.com | All Things Guitar.