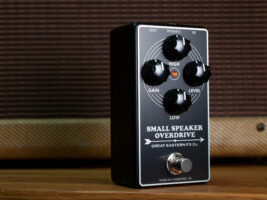 The inspiration for the effect is specifically the Fender Champ. Despite its small size and power rating, a microphone placed right on its eight-inch speaker would bolster its low-end and give a creamy, dynamic drive tone.
The pedal’s circuit is an all-original design, bearing controls for level and gain, as well as a two-band EQ. The high control offers both boost and cut, while the low control offers only boost. The gain range, as was the case with the old Fender champ, doesn’t get enormously saturated – Great Easter FX describes it as a “low to medium gain” pedal – but at higher gain settings it still offers the thick, saturated sound that was first achieved by pushing small amplifiers to their limits.
The pedal bears a sensitive input stage more akin to a vintage fuzz rather than an overdrive, and therefore performs best when it’s placed at the start of a signal chain. This also means that it will respond dramatically to your guitar’s volume control.
You can hear the pedal in action with the video from Noise Generator below.