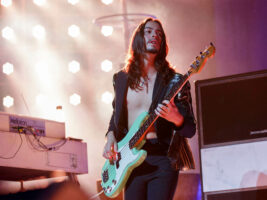 Greta Van Fleet bassist Sam Kiszka has spoken out on his opinion of popular music stating that it “almost insults people’s intelligence”.

READ MORE: Guthrie Govan says he has to ‘Think like a vocalist’ when writing songs on the guitar

The band are set to tour from September through to December this year following the release of their 2021 record, The Battle At Garden’s Gate. In an interview on podcast show Kyle Meredith With… The band spoke out about the making of the record with Kiszka noting, “It’s kind of the story of mankind… we frame it in a different way, just so you can see it in a different way. The best thing we can hope for is [being] thought-provoking.”
The band later went on to explore their varied listening habits, but if there’s one thing they’re not keen on it appears to be the sort of music you might find in the charts. Kiszka said, “We listen to a lot of stuff, not by choice, on certain radio stations, that is ‘popular music,’ and there’s no substance. They’re telling you exactly what to think, and why. And they don’t leave anything to mystery. And it almost insults people’s intelligence. And it doesn’t give you the ability to have your brain go off, and start firing creatively.”
The discussion of popular and modern music is an ever-prominent topic of debate lately with musicians such as Nita Strauss turning to join pop-turned-rock artist Demi Lovato’s touring band and the movement of guitar-based music infiltrating the pop charts once more with other artists such as WILLOW and Machine Gun Kelly.
Dave Grohl is another prominent figure to give his take on the soundscapes of today, sharing that he believes his daughter’s generation will start the next rock revolution. He stated, “What I see is this mutation, this change, this growth and progression that her generation, they’re the rock stars now. It’s not old guys like me.”
Greta Van Fleet however will be steering away from pop and continuing their usual classic rock style, with Kiszka sharing that the band are already working on album three.
You can grab tickets to see them on tour here.
The post Greta Van Fleet bassist says pop music “almost insults people’s intelligence” appeared first on Guitar.com | All Things Guitar.