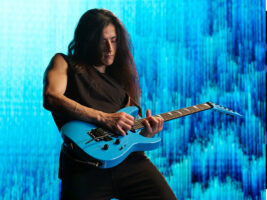 Jackson has launched a new American-made Soloist model, the American Series SL3 – the brand’s first American-made production model since the brand was bought by Fender in the early 2000s. The guitar features a bevy of specs geared for heavy, fast playing, and Jackson has aimed the launch directly at the “new generation of shredders.”

The sleek S-types notably feature through-body three-piece maple necks with two graphite reinforcement rods. These should ensure absolutely minimal movement of the neck with humidity changes. This neck is topped with a 12-16-inch compound-radius ebony fretboard, meaning a sleek, dark look and supremely easy bending at the higher frets. It also has a heel-mount easy-access truss-rod adjustment wheel.
Electronics consist of a HSS set of pickups from Seymour Duncan: a JB TB-4 humbucker in the bridge, and a Custom Flat Strat SSL-6 single-coil in the neck and middle position. The middle pickup is reverse-wound reverse-polarity, meaning selecting the neck and middle pickups will create a pseudo-humbucker sound.
Hardware is finished in black across the three finishes (Riviera Blue, Platinum Pearl, gloss black and Slime Green Satin). Notable appointments include a Floyd Rose 1500 locking vibrato, meaning wild divebombs are absolutely on the cards. Each of the finishes features a matching headstock for some pretty striking visual impact.

Fender Musical Instruments Corporation’s CEO Andy Mooney said of the launch: “I’ve been a metal fan since I could buy records; my first two were Black Night by Deep Purple and Paranoid by Black Sabbath. “I love metal as it’s home to so many virtuoso players, whose fans want to emulate them, the way I emulated Ritchie Blackmore. Jackson guitars are built to play fast and loud. We want to ensure this generation of heavy musicians have the tools they need to inspire the diverse audiences who love them. We’ve gone to great lengths to make the American Series Soloist SL3 the guitar that defines today’s ever-evolving metal sound. We believe it will appeal to the many touring guitarists who want a top-quality, USA-built Jackson at an accessible price. And we’ve made sure they are fast, fast, fast.”
Justin Norvell, Fender’s executive vice-president of product, added: “Jackson has a DNA that is unmatched in the heavy music space. Bringing Jackson’s craftsmanship back to its Southern California roots has been a labour of love for all of us. The enduring passion for metal enables us to do so. Building this guitar in the Corona factory opened up incredible new design possibilities: the neck is unmatched, each pickup absolutely screams, and there isn’t a single detail about this guitar that wouldn’t make any shredder proud.”
The new Soloist SL3 lists for $2,499.99 – $2,599.99 / £2,449 / €2,899. Find out more at jacksonguitars.com.
The post Jackson launches the American Series Soloist SL3 – the first US-made production Jackson guitar in over two decades appeared first on Guitar.com | All Things Guitar.