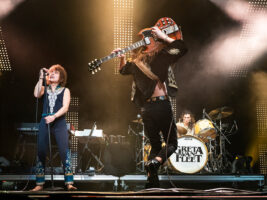 Greta Van Fleet frontman Josh Kiszka has issued an apology after fans called him out for appropriating Indigenous culture by dressing in costumes tailored after sacred outfits onstage.

READ MORE: Why does Greta Van Fleet’s music sound so much like Led Zeppelin?

The #SpeakUpGVF movement, started by fans on Twitter and sharing photos of Kiszka in costume from 2017, sought to receive a response from the frontman over a weeklong campaign.
Kiszka eventually came forward with a statement on Instagram, apologising for his actions and announcing a donation to the First Nations Development Institute.

Reactions to the apology and the campaign were mixed: Some users were offended or put off by the aggressiveness of the #SpeakUpGVF campaign, which was described as “mob mentality shit” and “harassment”.
Others celebrated the victory, applauding the campaign for attempting to let the artist right a past wrong instead of cancelling them outright.
Greta Van Fleet became a viral TikTok trend last year as the platform’s users began imitating frontman Josh Kiszka’s stage presence from their 2019 SNL appearance. The particular tune featured in the TikTok trend, You’re The One, saw on-demand streams jump a humongous 508 per cent, and its digital download sales increased by a whopping 1,955 per cent.
The rest of the band’s catalogue saw a 122 per cent increase in streaming thanks to the viral trend, so while the SNL clip itself may not have been the most flattering, given Kiszka’s off-kilter delivery, the band definitely came out on top.
Greta Van Fleet is currently touring North America, South America and Europe in support of their 2022 sophomore album The Battle at Garden’s Gate.
The post Greta Van Fleet frontman Josh Kiszka apologises over indigenous cultural appropriation appeared first on Guitar.com | All Things Guitar.