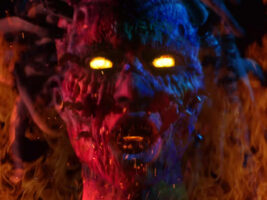 After debuting it at a live show earlier this week, Guns N’ Roses have released their new single Absurd in its full, studio-recorded form.

The new song is a reworked version of a track called Silkworms, which was written for the 2001 sessions of the band’s much-delayed 2008 LP Chinese Democracy. At Absurd’s live debut last week, frontman Axl Rose said: “Some of you might have heard this under another name, but this is really kind of absurd to try this,” said Axl Rose while introducing the track.
“Wasn’t that funny? And they don’t even know the joke yet. Okay, this is called Absurd.”
Aside from its long writing and recording history, the song is notable for a few reasons. Firstly, a section towards the middle of the song features some extremely processed vocals reminiscent of those found in electronic music. Secondly, the lyrics and delivery are slightly unhinged, with Axl singing about a “syphilitic priestess,” “screaming fucking banshee,” and a “pussy full of maggots.” “Isn’t that absurd?” asks Axl, at the end of the verse.
The track has arrived alongside a trippy animated video, which you can see below.

Since partially reuniting in 2016 – with Slash back on guitar and Duff McKagan on bass – Guns N’ Roses have been touring actively; their Not In This Lifetime tour is currently the third-highest-grossing tour of all time.
Back in December 2020, Slash said he was hopeful that the band would be releasing a new album by the end of 2021.
Last week, the guitarist announced that his newest album with Myles Kennedy and The Conspirators would be the first release of Gibson’s new record label, Gibson Records.
The post Guns N’ Roses share studio recording of new track Absurd appeared first on Guitar.com | All Things Guitar.