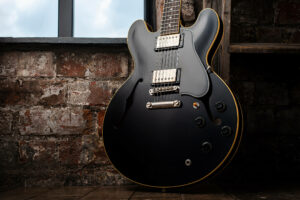 We recently got our teeth into a quartet of new Gibson ES models, made in the company’s Nashville facility. With the transition from the shuttered Gibson Memphis factory now fully complete, we caught up with the company’s Senior Director of Product Development Mat Koehler to find out what it takes to move ES model production 200 miles across Tennessee.
How long was the transitional period between the Memphis plant closing in 2019 and ES production recommencing in Nashville? Were there any logistical challenges?
“It was about two years before we were really back in business with ES models. Bringing them home to Nashville, and especially splitting them between Gibson USA and Gibson Custom Shop, made sense – and we were very fortunate that many of our amazing Memphis employees made the move to Nashville to continue working for Gibson.

“There were plenty of logistical challenges, some of which were just placement of machinery but also trying to get consistency and quality out of the original Kalamazoo presses from Memphis – they were on their last legs. We ended up having the re-cut the press plates to get the historic contours. They had worn down significantly over several decades.”
Gibson’s Mat Koehler with a recent ES model.
What are the main differences between the previous Memphis models and the new Original Collection ES-335 and ES-345 instruments? Were any vintage models used for reference?
“I worked for Gibson Memphis when I started for Gibson, so I have a special fondness for those guitars and for the employees. There were many daily challenges, from leaky roofs to labour shortages, but somehow everyone pulled together to create phenomenal instruments that will stand the test of time.
“The biggest difference between then and now is that our technological abilities have improved, allowing us to hone in on the specific contours and dimensions of the originals even further. And since the Historic Reissues went to Custom Shop, we were able to use our Historic replica parts, vintage tone circuit, et cetera.
“The most collectible and distinct years of the vintage original 335-355 models were 1959 (big neck, dot inlays, rounded cutaways), 1961 (slim neck, dot inlays, rounded cutaways), and 1964 (big neck, block inlays, pointed cutaways). We brought in several examples from each of these years to scan with our 3D scanner, and we chose the geometry that we felt best reflected each version.”
Gibson’s Original Collection ES models feature the brand’s Calibrated T-Type pickups.
Can you tell us about the development of the Calibrated T-Type pickups?
“That was something Jim DeCola was working on. Some of the most musical and underrated Gibson pickups ever were those made in the late 60s through the 1970s, with the ‘T’ on the top of the bobbins. Jim remade them as ‘T-Type’ instead of ‘T-Top’ since they are covered anyway and we weren’t going to remould the bobbins.
“But otherwise they are the same specs. Alnico V magnets of course. And ‘Calibrated’ refers to the fact that they are intentionally selected for neck and bridge – slightly underwound neck pickups and slightly overwound bridge pickups. We selected them for the Gibson USA ES models because they sounded too good not to use them!”
The Murphy Lab 1959 ES-335 Ultra Light Aged is a wonderful machine. By now, you must have seen that thread on The Gear Page in which people have reported some issues with Ultra Light Aged finishes cracking and chipping – is this a storm in a teacup related to a couple of isolated cases or was there a wider lacquer issue that’s now been fixed?
“Oh definitely a storm in a teacup. I’m not aware of any issues relating to ES models, just a few Les Paul Standards that were ordered with very dark red aniline dye backs… the oversaturation made them a little more brittle, which made them more susceptible to severe checking when not properly acclimated. We have an acclimation notice on the outside of our boxes. It is especially important that our dealers and fans fully acclimate their instrument in its case when changing climates/temperatures… I would say at least five hours, minimum. Just like you would with vintage 1950s instruments.
Check please: the Murphy Lab’s Ultra Light ageing means no chips or dents, just elegant checking.
“I used to deal vintage guitars so I’ve seen it time and time again. I think the majority of cases are just customers not quite accustomed to the behaviour of the vintage lacquer formula. We’ve got an original Burst and an SG in our Gibson Vault that have some flaking and chipping over the aniline dye as well… but the average buyer is not going to have a lot to compare. In any case, we are making the acclimation notice more prominent in a few different ways and educating our dealers and fans as much as possible.”
Are any more Murphy Lab ES models on the way? We’d love to see a 330…
“So would I! But we only have so much capacity and demand has been crazy high… so we’re sticking with the current ES range until that wanes.”
Read our review of the new made-in-Nashville ES models here.
The post Gibson’s Mat Koehler on moving ES production from Memphis to Nashville appeared first on Guitar.com | All Things Guitar.