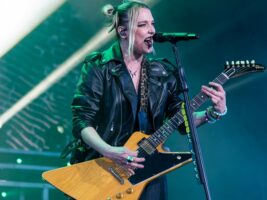 Halestorm’s Lzzy Hale on why she insists on being honest with fans: “It’s my way of putting some kind of good out in the world”

Halestorm frontwoman Lzzy Hale has spoken out on how she refuses to pretend that she leads a “perfect” life, insisting that she feels a duty to be honest with her fans above all else.

During an interview for 95.5 KLOS’s New & Approved show on Friday (July 8), Lzzy Hale speaks openly about why she wants to be honest with her fans when it comes to her anxieties and shortcomings. Discussing how she hopes to connect with a new generation of listeners, the vocalist explains why chose to reveal a more vulnerable side of herself in Halestorm’s latest album.
The new release, Back From The Dead, is the band’s fifth studio album and showcases the singer’s experience during the lockdown. When discussing the motifs within the release, Lzzy Hale explains to the show’s presenter Matt Pinfield that she wrote the songs from a personal perspective, but is overjoyed to see fans putting their own interpretations onto the album.
“I am open and honest with the people that follow me, and even the people [who] are just discovering me for the first time – it’s always better […] that way,” she says, explaining the personal aspect to the release.
“I’ve never really wanted to hide behind some veil or some weird idea that I’m this perfect person or I have everything figured out. It’s hard to figure yourself out, and it’s hard to find a way to be the truest self that you can be, especially when you’re growing up. A lot of the time, we know we’re different and we don’t even know why, or we don’t know what to call it.”
Hale progresses to elaborate on why, now more than ever, she places this honesty in such high regard, admitting that she wants her music to resonate with a younger generation who are struggling with self-acceptance.
“It was important for me to put that out there in the world. I’ve had many conversations with specifically young people who are trying to […] find their place in the world and find their superpower — and the things that make them different are that [strength].”
She continues, elaborating on how she plans to convey that message to both her pre-existing fans and a new generation of listeners:
“It’s important for me to put that out there just as a source of, ‘Hey, I’m still here. I made it through. I can be proud of everything that I am, both my light and dark, both my weird and not, my big, my small, my loud, my quiet, and if I can find that place in my journey, then so can you.’ And so it’s my way of putting some kind of good out in the world.”
Find the full interview with Lzzy Hale on 95.5 KLOS’s New & Approved Show.
The post Halestorm’s Lzzy Hale on why she insists on being honest with fans: “It’s my way of putting some kind of good out in the world” appeared first on Guitar.com | All Things Guitar.