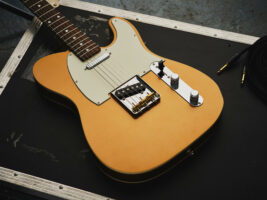 Fender has been accused of overcharging millions of guitar players for instruments, in a new class-action lawsuit being brought by a UK consumer advocacy group.

The claim comes as a result of a 2020 ruling by the UK’s Competition and Markets Authority (CMA), which fined Fender £4.5 million for price fixing, or “preventing online discounting for its guitars.” The CMA’s ruling stated that Fender’s behaviour meant that prospective buyers saw no difference in price as they shopped around for guitars.
At the time, Andrea Coscelli, CMA Chief Executive, said that: “It is absolutely essential that companies do not prevent people from being able to shop around to buy their products at the best possible price. This is especially important for expensive and popular items like guitars, and so Fender’s actions could have had a big impact on customers.”
According to The Times, lawyers for Elisabetta Sciallis, a policy adviser at the consumer group Which?, were the ones to initiate the latest proceedings against Fender Europe and Fender USA.
The class-action suit is rooted in the 2020 ruling,arguing that it means “potentially millions of musicians” who bought guitars between January 2013 and April 2019 paid over the odds. If the suit is successful, those who were found to have paid over the odds, could be entitled to damages.
Fender has told The Times that it will not comment on an ongoing legal matter.
The post Fender hit by class-action lawsuit alleging it overcharged millions of guitarists appeared first on Guitar.com | All Things Guitar.