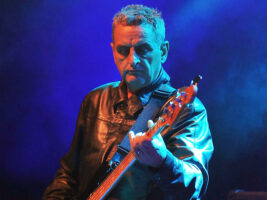 Paul Ryder, bassist for the Happy Mondays, has died at the age of 58.
The news was broken via the band’s social media, which shared a statement reading:
“The Ryder family and Happy Mondays band members are deeply saddened and shocked to say that Paul Ryder passed away this morning. A true pioneer and legend. He will be forever missed. We thank you for respecting the privacy of all concerned at this time. Long live his funk x”

The Ryder family and Happy Mondays band members are deeply saddened and shocked to say that Paul Ryder passed away this…
Posted by Happy Mondays on Friday, July 15, 2022

Ryder was also the brother of frontman Shaun Ryder, and part of the band’s original lineup, in which he and Shaun were joined by Gary Whelan (drums), Paul Davis (keyboard), and Mark Day (guitar).
The band formed in 1980, and were instrumental in combining the UK alternative rock scene with the UK rave scene, creating a style and subculture known as Madchester.
The band’s initial incarnation lasted until 1993, when they broke up following the troubled recording and commercial failure of their record Yes Please!.
In 1999, Paul would join the first reunited lineup which lasted until just 2001. The band once again reformed in 2004, this time without Paul Ryder, however would disband again in 2010. Their most recent reformation in 2012 saw Paul Ryder rejoin the band.
Outside of his work in the Happy Mondays, Ryder has released an album with his side-project Big Arm in 2008, and performed live with the New York funk group Tom Tom Club alongside Chris Frantz and Tina Weymouth. Frantz and Weymouth also produced Yes Please!.
The post Happy Mondays bassist Paul Ryder dies aged 58 appeared first on Guitar.com | All Things Guitar.