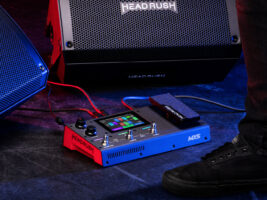 HeadRush has thrown its hat into the ever-expanding ring of floor-based multi-effects units, with its new MX5. The effects unit is chock-full of effects and amp models, and competes with similar units such as the Neural DSP Quad Cortex and Line 6 Helix.

Hardware for the MX5 consists of a sturdy metal enclosure, two control knobs, three footswitches and an expression rocker. In the centre of all of this is a 4-inch colour touchscreen, which serves as the main interface for creating and modifying patches, with drag-and-drop operation of virtual rig components.
The pedal’s I/O panel provides jacks for mono guitar input, stereo guitar output, eighth-inch headphone and auxiliary connections, MIDI in and out, an effects loop and an external expression pedal. HeadRush says there’s also a USB port for further control and loading in a “virtually unlimited” number of impulse responses This port can also allow the MX5 to function as an audio interface or re-amp unit, connecting directly to a DAW at a quality of up to 24-bit 96kHz. You can also transfer presets and loops, and upgrade the MX5’s firmware using this USB connector.

Arguably the most important factor here is the firmware, which in this case gives you a library of 50 guitar and bass amplifier models, 15 speaker cabinet models, 10 microphone emulations for the cabinets, 300 impulse responses, and 66 effects. Like other units in this category, the massive amount of effects, amplifiers and cabinets make this an all-in-one solution – it can be integrated into a larger rig, but will still hold its own on stage, connected directly to the front of house.
There are a few other neat features bundled into the pedal. For example, changing presets is ‘gapless,’ with reverbs and delays spilling over if they were active. There’s an in-built looper that makes use of the screen. The FX loop is also stereo for easier rig integration – and it also means you can connect the unit to a guitar amplifier using the “four cable” method, to place effects blocks before and after a real preamp, and then send that signal back to a real power amp.
The MX5 has launched with a list price of £429.99. Find out more at headrushfx.com.
The post HeadRush launches the new MX5, a floor-based effects processor appeared first on Guitar.com | All Things Guitar.