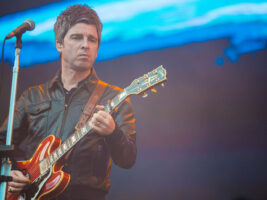 Noel Gallagher may be revered as a great songwriter, but he’s revealed that he often forgets his lyrics when performing live, relying on some hasty improvisation when needed.

Gallagher revealed to The Sun: “Brain freeze, I get it. I get them when I’m doing gigs to 70,000 people. As the next line is coming I think, ‘Seriously, what is the next line to this song?’ You’re thinking, ‘I genuinely don’t know what it is’. Somehow it falls out of the sky. But sometimes I just have to make shit up.
“My band will say, ‘Are they the right lyrics?’ And I go, ‘I don’t think so’.”
He then revealed: “I’ve played Don’t Look Back In Anger a billion times and sometimes I think, ‘What is the first line?’”
He also revealed to the Sun that he’s currently working on an album of covers – not of big-name tracks, but of obscure songs that he was influenced by. Explaining the more underground nature of the tracklist, Noel explained: “Everybody does Bob Dylan covers albums – it’s boring.”
Earlier this year, Gallagher spoke out about his anger at the UK prime minister and the government in general for the way they handled the COVID-19 pandemic. He also specifically called Boris Johnson a “fucking idiot” for catching the disease.
Gallagher accused the UK government of not preparing for a second wave, despite one being discussed as the first was happening. “What annoyed me most about it was in the first wave they were saying there’s gonna be a second wave and then when it came they did absolutely fucking nothing to prepare for it.”
He again criticised the UK prime minister, saying: “Boris Johnson has proved himself not to be the fucking man in the crisis. Number one, getting it for a start – you fucking idiot. Right at the start of it, he’s out of the game for three months. Hang on a minute, where is the fucking idiot who’s paid to make the rules? Oh, he’s in bed because he’s ill. Fat cunt.”
The post Noel Gallagher reveals he forgets lyrics and has to “make shit up” when playing live appeared first on Guitar.com | All Things Guitar.