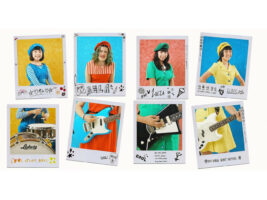 The Linda Lindas, the punk band that found viral fame with their hit Racist, Sexist Boy, have followed up that track with a new song, their first released after their signing to Epitaph Records.

The new track comes alongside a colourful music video, and showcases the talents of band members Bela Salazar (16), Eloise Wong (13), Lucia de la Garza (14) and Mila de la Garza (10). Oh! was written across the pandemic, and according to the band “deals with trying to help out someone and having it blow up in your face.”
The track that saw the band rocket to fame, Racist, Sexist Boy, gained traction after a performance of the song at the LA Public Library during AAPI Heritage Month was uploaded. It was inspired by a racist comment 10-year-old drummer Mila de la Garza received at school. “A little while before we went into lockdown, a boy in my class went up to me and said that his dad told him to stay away from Chinese people,” she said. “After I told him that I was Chinese, he backed away from me. Eloise and I wrote this song based on that experience.”
The likes of Tom Morello and Thurston Moore praised the song and the energetic live video. While it was their breakout hit, they had been steadily gaining a following beforehand. They’ve previously opened for Bikini Kill, Best Coast and Money Mark. And At 2019’s Save Music In Chinatown 17, Eloise took the stage with LA punk legends The Dils to perform the song Class War for the first time since 1979.
Check out the new video below.