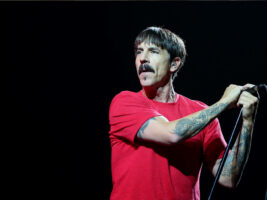 Red Hot Chili Peppers have confirmed the dates for their huge worldwide stadium tour across 2022.