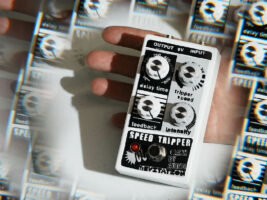 In collaboration with Texas alternative music festival Levitation, Death By Audio has unveiled its latest pedal: the Speed Tripper.

The unit, limited to 666 pedals, is an optical phaser that’s been placed in the feedback loop of a delay circuit, leading to a swirling, psychedelic sound. As the product description puts it, “The repeats bend in and out of phase with one another, giving filtered, morphing swells that sound beyond psychedelic.
“It seems like such a simple concept; we were surprised we had never heard this before. The actual sounds of tripping! Slap on the Death By Audio touch where ‘everything must be done to the extreme’ and there you have it, you are tripping on speed!”
The pedal features four knobs: feedback, delay time, tripper speed and intensity. The former two control the delay circuit, and the latter two control the phaser. The intensity control is how you control how much of the delayed signal is sent into the phaser circuit. The phased and unphased delay paths feedback differently. The feedback and intensity knobs are “highly interactive” with each other, too, with higher settings pushing your sound into extremely modulated weirdness. The intensity control also adjusts at what feedback point the pedal will begin to oscillate.
Internally, there is a blend pot which balances between the wet and dry signals. This has some extra output, too, as at max, the wet signal is “even louder” than a dry signal would be.
The pedal will ship across late October and early November.
Lists for $269. Find out more at levitation.fm.
The post Death By Audio unveils new Speed Tripper delay, limited to 666 pedals appeared first on Guitar.com | All Things Guitar.