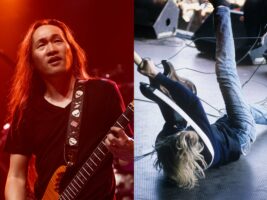 Herman Li says Kurt Cobain is “one of the best guitar players” in the world: “Expression is way more important than how fast you can play”

Herman Li of Dragonforce has named Kurt Cobain one of “the best guitar players” in the world while discussing how technicality isn’t the most important thing guitarists should aspire to.

In an interview with YouTuber Anthony Fantano, Li said, “A lot of people ask me all the time, who do I think is the best guitar player in the world. And I come up with different answers all the time. I say, ‘Well, Kurt Cobain is one of the best guitar players in the world’ and they’ll go, ‘Oh, my god, what are you talking about? I thought you knew something, Herman!’ – He inspired millions of people to play the guitar.”
Li, the hands behind the technical milestone that is Through The Fire And The Flames, elaborated more on his stance, explaining, “[Kurt] connected with them. Obviously, the feeling, expression is way more important than how fast and how much notes you can play in key. But if you can’t connect with somebody, it’s a different thing.”

Describing the simplest thing as “probably the most important thing,” Li added that learning to do complicated stuff done to “impress your friends”, or “flexing a little bit”.
“But I always tell people, ‘Learn the simplest guitar parts and then make it your own,’” Li continued.
Li summarised his message with this bit of advice: “You’re spending so much time to play this really complicated lick, when you can just create your own one that’s similar. It’s easy to make something simple, sounding like yourself, then it is to make a complicated part sounding like yourself.”

Li recently made headlines when he revealed that DragonForce only earned about $3,000 for the placement of Through The Fire And The Flames in the seminal 00’s video game Guitar Hero, not the “millions of dollars” people would have imagined.
He was also quick to acknowledge that contributing the song to the video game was more about presenting guitar music to the world and less about the dollars at a time where “guitar music wasn’t really that popular”.
The post Herman Li says Kurt Cobain is “one of the best guitar players” in the world: “Expression is way more important than how fast you can play” appeared first on Guitar.com | All Things Guitar.