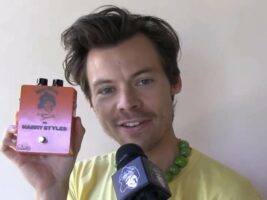 “I don’t really use that many pedals”: Harry Styles gets gifted a one-off pedal that uses transistors from the Ed Sullivan Show studio

Harry Styles, the latest guest to get interviewed by DIY darling Nardwuar, received a one-of-a-kind effects pedal from Satellite Amps, only to later admit that he rarely uses pedals in his guitar playing.

The interview, which took place at Coachella, heard Styles speak about his childhood idols to the sources of inspiration behind some of his most successful tracks.
When explaining how he is most commonly seen sporting a Gibson model, the host then presents Styles with a unique pedal he describes as a fuzz, made by Satellite Amps, one of just a few in the world.
“I have a gift for you, right now. A special gift so that nobody can reject any ideas you have,” Nardwuar explains. “It’s an actual guitar pedal for your Gibson! […] It’s from Satellite Amps in San Diego, made from a transistor from the Ed Sullivan board!”
The host continues to describe the significance of the unit to Styles, confirming that it is a  unit designed specifically for him:
“All the bands that played on the Ed Sullivan show between ’48 and ’71, played through that transistor! There’s only 30 in the world,” he exclaims, adding, “Adam from Satellite Amps in San Diego made that and it’s a special Nardwuar Vs. Harry Styles [edition]!”

Seeming less enthusiastic than Nardwuar about the pedal, Styles admits that while it is a “very nice gift”, he rarely uses guitar pedals – explaining that he leaves his pedalboard backstage when performing live.
“I don’t really use that many pedals. I don’t do too much changing between songs,” he says. “I have a wired microphone and it gets tangled in my pedal board so I leave all my pedals like at the back… but this I will be adding.”
When asked if he will use the pedal when writing new music in the studio, he replies, “Well I usually write on piano… I don’t write too much on guitar. For the spicy fuzz, I will be using this from now on. Thank you Adam and thank you, Ed Sullivan.”
It’s not clear exactly what this pedal is – the video describes it as a fuzz, but a few years ago, Satellite released the Sully, a super-limited “colouration/boost” with each one using a germanium transistor taken from the Fairchild 664 EQs that were used on the iconic Ed Sullivan Show, which were said to be limited to 40 (not 30) units.

However, Satellite main man Adam Grim posted about the pedal on Instagram following the publishing of Nardwuar’s video confirming that it was in fact a one-off design made for Styles using the one remaining transistor from the Ed Sullivan Show.
“This is a one off, custom pedal made just for Harry, with the last saved transistor from the Ed Sullivan show EQ section,” he wrote. “I have 16 Fairchild modules that came out of the audio board from the TV show.
“There were booster boards for broadcast, and that’s where these transistors came from. I had made a very small limited run of pedals called the Sully that have the rest of these transistors. There are 25 out in the world. No more.”
The post “I don’t really use that many pedals”: Harry Styles gets gifted a one-off pedal that uses transistors from the Ed Sullivan Show studio appeared first on Guitar.com | All Things Guitar.