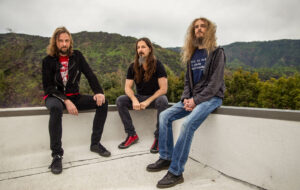 “I just can’t get excited about the prospect of making videos of myself for a living”: Guthrie Govan on why he’ll never be an “online guitarist”

It’s typical of the unconventional and quirky nature of instrumental fusion of instrumental fusion giants to release a live album 18 months into a global pandemic. But despite the fact that new album Freeze! captures performances from the band’s tour of Europe at the beginning of 2020, it’s not totally removed from the defining event of our age – the performances were captured as they blazed across Europe on tour with the spectre of COVID hot on their heels. They found that each country they visited was on the brink of lockdown during their stay, and then closed down very shortly after they left. Somewhat miraculously they completed all but two dates of that 40-date European tour.

The live album is a timely reminder of what we’ve been missing. Though featuring just six songs, rest assured this is no short player: they customarily extend and cajole each arrangement to flex their virtuosity and sense of fun. And as per one of their inspirations Frank Zappa, the studio versions of songs arguably provide just a framework, and it’s in a live raucous environment that they truly come to life.
While many of our guitar heroes have been ever-present on the internet since the world shut down, social media-shy Guthrie Govan has been quiet. But that doesn’t mean he’s been resting on his laurels, as he was keen to share with us.

A live album captures a particular moment in time. Are you able to listen back to your performances and enjoy them? Or do you tend to critique?
“My inner perfectionist immediately starts to scan for flaws whenever I hear my own playing but the more distance I can get from a recording, the easier it becomes for me to listen from a healthier “bigger picture” perspective. Naturally, I found myself wincing at all kinds of tiny guitar details when The Aristocrats were comparing live performance alternatives for the songs featured on Freeze! but when the iTunes shuffle mode recently decided to surprise me with that album, I actually found myself rather enjoying it!”
“I think it’s important to find a balance: if you always hate what you do then music will eventually become an exhaustingly joyless endeavour, whilst never finding fault in your own playing will leave you with no real motivation to keep progressing.”
How do you prepare for a tour when the performances are so improvised and free flowing?
“You can’t ‘prepare’ meticulously for an intentionally unpredictable musical scenario like that, but we work on the premise that you shouldn’t really need to if all the players involved are sufficiently compatible. I think the Aristocrats are very fortunate in that we all seem to understand each other on an instinctive level: this greatly reduces the need for planning things in advance. Part of the exhilaration of playing live lies in just trusting the band’s natural chemistry whenever one of us takes a spontaneous risk and the others need to react in real time. We’ll always try to learn the new songs properly before any tour begins, of course… then we’ll rehearse maybe once and after that, we’re just ‘using the Force’ as best we can.”