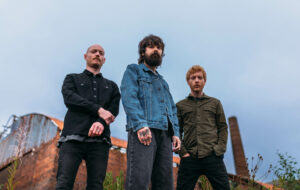 “I want to try and find a brand-new sound for my guitar”: Simon Neil on building pedals, and falling back in love with being in Biffy Clyro

“There was just this need and hunger to make music, to feel this sense of purpose.” The guitarist and vocalist of the infamous Biffy Clyro clenches his fists as he stresses the all-consuming thirst he felt to make music amidst the confusion of the last 12 months. It’s been a while since we last caught up with Simon Neil, and 2021 was a big year for not only the band but himself as an individual, with the success of new album The Myth Of The Happily Ever After and the second drop of his signature Booooom/Blast pedal selling out once again. “We didn’t even tell the record company we were making a record,” he continues, sat in front of a print of The Girl With The Pearl Earring wearing a suitably contrasting hot pink hoodie. “It was very much purely about trying to find slices of happiness in a tough time amongst friends and fortunately it was fruitful.”

READ MORE: “It was like being in a bomb shelter”: Volbeat on pandemic blues and recording in isolation

Neil is full of enthusiasm and a bright spirit as he tells us about his re-ignited passion for music and his friendship with fellow bandmates, James and Ben Johnston: “It’s nice to look back and think ‘You know what? We fucking put another record out’,” he reflects. “I’m so proud of it. The purpose of the album was to come back together as three pals making music and doing it for us and no one else, the simplicity of it brought me a lot of joy.”

Musically, the album delivers on everything we expect of Biffy Clyro: Punchy drums, explosions of distorted and fuzzed-up guitars, scorching vocals and lyrical magnificence. However, the record’s theatrical, twisted fairytale theme gives this one a different energy to previous albums.
“I was really worried it was gonna be a cynical record but I think musically and hopefully spiritually as well, the album does bring a sense of romance and wonder.” He adds, “The album is unsure of itself lyrically but musically it knows exactly what it is.” Formed over a short period of six months, Neil tells us the music was instinctive and spontaneous, and it’s unusual vibe was crafted from the Scotsman putting less of his head into it and a lot more heart.

Road hogs
Since the album’s release back in October, the band headed out on the road, and touring is something that Neil says makes him feel ‘complete’: “There’s something in the air, there’s electricity and a real necessity in people’s souls and spirits, I certainly felt that as the guy on stage playing,” he explains, “There’s this real unique excitement and also the fear that things could change in two weeks, we might not get a chance to do this again if we do go into lockdown but there was a real sense of ‘This is it, we’re in the moment’. That’s what made the shows so special.”
He admits the nerves were ‘very raw and very real’ as it had been the longest amount of time in over two decades that the band hadn’t played live, but the community spirit of the wonderful industry of music acted as a comforting hug to welcome the trio back to live music, “It’s why music is my favourite art form, there’s such a communal spirit,” he says. “During lockdown we’ve all formed new relationships with music, it felt like new times; we’ve all discovered a new level of consciousness and it couldn’t have been more exhilarating.”
Image: Kevin J Thomson
With the tour came a new outlook on his guitar rig, with Neil’s notoriously individual and complicated live rig giving way to something more straightforward.
“I used to take four heads leading through four different cabs to make the one guitar sound,” he explains. “Since the last 18 months I’m trying to streamline my sound.” The recipe now is much more straightforward – an Audio Kitchen Flying Squirrel and a Marshall Silver Jubilee, which he says keeps everything simple.
There’s one life-long habit he won’t kick, however. “I’ve still got my Metal Zone pedal going all the time!” He grins wickedly, “I live and die for the Boss Metals.”
Guitar wise, he dabbles between his Michael Landau signature Strat or his ’67 Les Paul regularly and admits the recording process also involved some changes when it came to the rig in order to adapt to the challenges that came with recording on a farm in Ayrshire, “I didn’t have access to a lot of my normal gear,” he explains. “I used a Matchless head for the very first time and the BE100 Friedman head, which I never used before, you can drive these heads to match the frequency if you really crank it. I used an [Universal Audio] Ox box to simulate a speaker drive and that was a real revelation.”

He tells us how track A Hunger In Your Haunt is about exactly that; the worry of not knowing where you are in the world, but Neil tells us to not waste time, and that all we should worry about is the here and now, “We’ve all seen a lot in the last 18 months, let’s not piss about, let’s just do the best that we can with our lives right fucking now!”
The last months of 2021 brought further uncertainty to the live music industry that was barely recovered from the shut-downs of 2020, but if you’re longing to be in a crowd chanting ‘Mon the Biff!’, then you’ll be pleased to hear the band are heading out on tour once again and returning to the UK with some shows in the summer. Although the pandemic has taught him ‘not to count his chickens’, Neil is besotted with the Biff and ready to share his pride and joy with you.
“I love this band more than ever, I love making music more than ever and I think that is what we’re most excited about moving forward.” He states, “The hunger to get on that stage is just still there, we got a wee taste of it a month ago and hopefully everyones favourite band will be out near them and we can all go out and share and interact and just be together ‘cause I fucking need it,” he flashes his wide grin. “That’s the plan for next year, pure joy.”
Biffy Clyro’s The Myth Of The Happily Ever After is out now.
The post “I want to try and find a brand-new sound for my guitar”: Simon Neil on building pedals, and falling back in love with being in Biffy Clyro appeared first on Guitar.com | All Things Guitar.