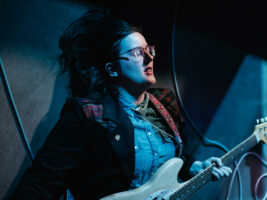 “If you don’t believe in yourself or your art, why should anyone?”: Get Offset’s Emily Harris on backing herself and the guitars that break her heart

The moment it all started
“I’ve been playing guitar since my hands were big enough to fit around the neck. We had a family friend who played guitar and I thought he was just the coolest. My mom had an older Epiphone acoustic, and I convinced her to give me my first lessons as soon as I was big enough. She taught me F, C, and G chords. I’m sure it hurt something awful – the strings were probably super old – but I never really put the guitar down after that.”

READ MORE: “This is the only thing I know how to do!” Black Keys guitarist Andrew Gabbard on the challenges of recording a record with his…

I couldn’t live without my…
“I’m not going to pretend I’m not sentimental about gear, but I also wouldn’t say there’s anything I couldn’t live without. I think my oldest and dearest guitar is a Gibson Hummingbird that I’ve had since high school, not that I’m known for being an acoustic player. I’ve recently acquired an Elvis Costello Signature Jazzmaster, which was a bit of a white whale guitar. For pedals, I’d find it hard to gig with my band Sundae Crush without something that can self-oscillate on command. My go-to for that is the Bookworm Effects Delayvid Foster Wallace. I love that thing!”

The one that got away
“I don’t usually let guitars go until I’m absolutely sure that it won’t break my heart, and I’ve thankfully never had anything stolen! A few years ago, I traded some old friends to Mike & Mike’s in Seattle and got to talk to Mike about the people who ended up with my guitars. It really warmed my heart when he told me how excited their new owners were. I will say, I’m extremely bummed I never got one of those Fender [Alternate Reality] Tenor Telecasters they had a few years ago… I’m still on the hunt for one of those for a reasonable price.”
My signature model
“I actually did design a guitar with Nashville-based luthier Kevin Equitz! It’s called the Ainsley and it’s lovely. If I did it again, I’d do something completely different. I’d love a tenor guitar in a Jazzmaster shape with a true tenor nut width, like Eastwood had on their Astrojet series versus their wider Warren Ellis series.”

The first thing I play when I pick up a guitar
“It depends on how fancy I feel! Anyone who watches my demo channel knows I love to throw in Hey Sandy by Polaris, which is most famous for being the theme song from the 90s Nick show Pete & Pete. But if I want to show off, I’ll play this fingerstyle arrangement of Duke Ellington’s Sound of Love, a tricky chord-based walk-up that makes me feel impressive.”
The best advice I’ve ever been given
“I don’t know how I feel about a lot of the advice I’ve gotten. As I hit my 30s, I wish I’d just done what I wanted to do more in my life and in my music. Honestly, I think the best advice I’ve taken in the past few years was when Ryan Burke from 60 Cycle Hum told me to not worry so much about getting the demo channel perfect and to just do it. He was right. It’s not about being perfect out of the gate, that’s impossible. You figure the rest out as you go. I hope that my videos are only getting better, I feel like they are. That kinda leads into something Mark Volman told me once, that every successful artist needs confidence. I used to think he was wrong, but now I believe him. Even if you’re full of doubt, which is totally normal, you need to exude confidence. If you don’t believe in yourself or your art, why should anyone? Am I the best guitarist or demo artist out there? Hell no, but I’m still plenty good and have a lot to offer. My success is indicative of that.”
Image: Steven Dangerfield
My Spinal Tap moment
“I’ve never had anything too major, but I remember the Sundae Crush NYE gig going into 2020. It was honestly a great show, but man, things kept going weird. At one point I tried to stand on top of my amp and lost my balance, ending up with a huge shiner on my shin that was there for over a week. My Les Trem II wasn’t tightened properly and came off into my hand while I was using it. And then when I went into the crowd to solo (something I do every gig with no issues) someone stepped on my cable, and it came unplugged from my pedalboard!”
My guilty pleasure
“I don’t believe in guilty pleasures! If you love something, own it. I feel guiltier about the stuff I don’t like to be honest. But for the music I make, I think folks might be surprised by how much I love country music. And I know people get surprised when I defend a lot of pop stars.”

I wish I was there
“Easy. Prince on the Parade tour. Ideally one of the warm-up gigs in a smaller room.”
The first thing on my rider
“To be completely honest I’m going to ask that the bath towels are actually super soft and bigger than an average bath towel. It’s my big luxurious want in life. And after a sweaty gig, you take a shower in a venue and have to use some nasty, scratchy, teeny, little rag? No thanks. I’d rather have a per diem for food and drinks and have a nice bath towel, thanks. Real riders are boring, y’all.”
If I could just play one thing
“Can’t is for cowards! But I’d love to have stronger country chops. I have a pedal steel I want to get way better at, but I struggle to find the time and energy.”
Listen to the Get Offset podcast here. Sundae Crush’s A Real Sensation is out now.
The post “If you don’t believe in yourself or your art, why should anyone?”: Get Offset’s Emily Harris on backing herself and the guitars that break her heart appeared first on Guitar.com | All Things Guitar.