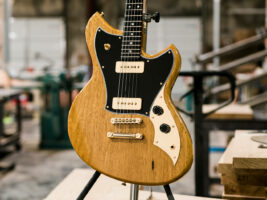 “I wanted to do something that had elements of classic designs, but in a twisted way”: Dennis Fano of Novo Guitars

I first encountered Dennis Fano’s work in the pages of Guitar Magazine some 20 years ago. My former colleague Rick Batey had interviewed XTC’s Andy Partridge, who’d raved about a guitar that was custom-made for him by a little-known builder in New York. It turns out that the builder, Dennis Fano, was then little-known because it was the first custom guitar that he had made.