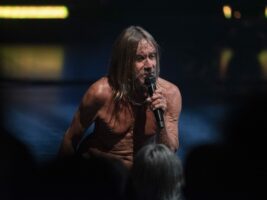 Scheduled to be released on January 6, Every Loser is set to see Iggy returning to his heavier rock roots following his jazz-inclined previous effort 2019 Free. In a statement shared with Rolling Stone announcing the album, the Godfather of Punk promised “The music will beat the shit out of you,” adding that “I’m the guy with no shirt who rocks; Andrew [Watt] and [his label] Gold Tooth get that, and we made a record together the old-fashioned way. The players are guys I’ve known since they were kids.”
Iggy previously released the single Frenzy as a preview to the album itself on October 28. Listen to the track below:

Iggy previously released the coronavirus-themed single Dirty Little Virus in December 2020 following the release of his 2019 LP Free. He notably took a journalistic approach to the single, noting in a video that he “I was moved to write a direct lyric, not something too emotional or deep.”
“[It’s] more like journalism: ‘who, what, when, where?’ I left out the ‘why’ because that gets too complex, but I put in how I felt about it. It’s been the big thing happening in my life – and everybody else’s, I reckon, for almost a year now. If there was still a man of the year, it’d be the virus.”
In between the release of Free and his upcoming record, Iggy has also appeared in numerous collaborations including contributing vocals to three tracks on Belgian composer and violinist Catherine Graindorge’s EP The Dictator, as well as reworking Elvis Costello’s song No Flag from his 2020 LP Hey Clockface complete with vocals sung entirely in French.
In 2020, Iggy also released the seven-disc deluxe box set The Bowie Years, which featured expanded and remastered versions of his David Bowie-produced albums The Idiot and Lust for Life, originally released in 1977.
The post Iggy Pop promises his new album Every Loser will “beat the shit out of you” appeared first on Guitar.com | All Things Guitar.