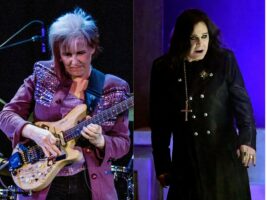 Jennifer Batten thinks being a woman prevented her from auditioning for Ozzy Osbourne: “If it was the same thing today… it’d be a whole different story”

Describing her time emerging as a female guitarist in the mid-1980s, Jennifer Batten, who has since worked with artists such as Michael Jackson and Jeff Beck, has spoken out about the obstacles she has continually faced as a woman throughout her career.
“I’ve gotten comments over the years. A lot of guys will say, ‘You play pretty good for a girl.’ Or, the best one, this guy said, ‘You play just like a boy.’ What does that even mean,” she tells Ultimate Guitar.
Batten elaborates, sharing how she believes these attitudes cost her the opportunity to perform alongside the Prince Of Darkness.
“I remember, specifically, before [working alongside Michael Jackson], I was trying to get an audition with Ozzy Osbourne and they were of auditioning everybody in LA at the time,” she explains. “I know my audio got to the right people, and I didn’t even get a chance. Looking back, it’s a super macho gig, and they probably wouldn’t even consider a female for that…[However,] if it was the same thing today, I think it’d be a whole different story.”
In the discussion, Batten goes on to praise musicians such as Nita Strauss and Nili Brosh for challenging people’s attitudes towards women in rock. She also shares her advice for new artists who are looking to succeed as a musician in the current day:
“The only thing that you can control is your improvement as a musician,” she says.
“I think one of the biggest disservices you can do to yourself is to compare yourself with another player. If you look at other players and are inspired by them, that’s great. But, if you look at other players and go, ‘Oh shit, I’ll never be that. Why bother?’ Then, you’re really doing your own creativity a disservice.”
The post Jennifer Batten thinks being a woman prevented her from auditioning for Ozzy Osbourne: “If it was the same thing today… it’d be a whole different story” appeared first on Guitar.com | All Things Guitar.