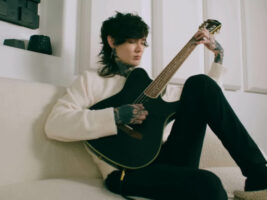 Polyphia‘s Tim Henson has addressed negative comments he previously made about shred culture in a new interview with DragonForce’s Herman Li.

Speaking to Li regarding some of the controversial comments on shredding culture he has previously aired, Henson explained, “At the time, it was a very frustrating thing to kind of be lumped into something [shred culture] that we’re really trying hard to separate ourselves from. In hindsight like that was – I was probably was having a terrible day that day, and just like taking it out on whatever.”
“Which, you know, again comes to bite me back in the ass. And like I said, I’ve since then learned to not yuck people’s yum. It’s very much wishing I can just not have that one exist out there.”

Henson caused controversy in August last year during an appearance on an episode of Beato’s Modern Guitar round table discussion alongside Tosin Abasi and Misha Mansoor where Abasi noted that Henson tended to “reject guitar hero stuff”. Henson agreed with Abasi’s statement, noting, “A lot of it was rejecting it. You know, like ‘I don’t think I should do big bends like that because it’s going to sound like that era’ – the boomer-ish sound…”, leading to much debate in the comments.
He would later clarify he was not being derogatory of shredding in a follow-up episode of the show.
Henson has more recently aired additional comments on shred culture in a interview where he also claimed that “It’s not really cool to be in a metal band”, explaining, “Literally every guitar-centred thing is just solos on solos on solos. We’ve certainly done records that were solos on solos on solos but between them we actually had hooks.”
He continued, “The guitar is the only guitar-y thing about Polyphia: the rest is just humans playing programmed parts.”
The post Polyphia’s Tim Henson addresses negative comments he made about shred culture in conversation with Herman Li appeared first on Guitar.com | All Things Guitar.