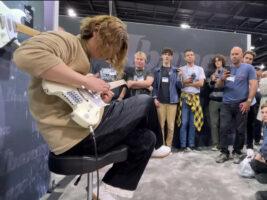 Ichika Nito took his guitar wizardry from the bedroom to the NAMM show floor in a rare performance to a live audience – and it seems he’s already itching to play to more people.

READ MORE: “We’re finding out what it means to be uniquely Eastman” Otto D’Ambrosio on what makes us Juliet the company’s most important guitar yet

The Japanese six-string wunderkind self-described as a “bedroom guitarist” has been dazzling fans online with his virtuosic playing and exciting concepts – mostly in minute-long videos.
Earlier this month, Nito gave a rare performance at the Ibanez booth during the NAMM Show 2022 and shared footage of it to YouTube. Watch it below:

It seems Nito has caught the live performance bug, as shortly after, he posted to Instagram to share that he was keen on playing live, and at shows around the globe.
“Dear promoters, I would like to have a show in many countries more and more from now on! So, if you are interested, please invite me to your show!” wrote the guitarist.
Nito is endorsed by Ibanez, and has one signature model with the company: the ICHI10. The high-performance electric guitar is also Ibanez’s first headless model and matches a nyatoh body with a three-piece maple-bubinga neck and a roasted birdseye maple fingerboard.

It would also appear that Nito is stacking his producer credits, revealing he helped produce Machine Gun Kelly’s new song with Travis Barker and singer glaive, More Than Life.
“It’s a pretty crazy story that I’m a guy from Japan that barely speaks English and [was] found by @alex_soifer and this guitar loop is now with Machine Gun Kelly, also I’m [to] be a co-writer with some pretty legendary artists,” wrote Nito in an Instagram post.