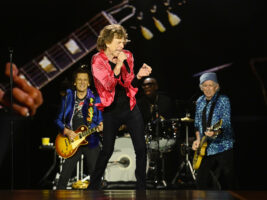 The Rolling Stones called off their concert at Amsterdam’s Johan Cruijff ArenA last night (14 June) at the last-minute, after discovering frontman Mick Jagger had tested positive for COVID-19.

READ MORE: The Rolling Stones play the Beatles in first Liverpool Show since 1971: “We decided to do a cover of a song written by some local lads”

A statement from the band’s Instagram explained that Jagger tested positive after experiencing COVID symptoms “upon arrival at the stadium” – the group has promised to reschedule the show for a later date and honour tickets purchased for the original show.
“The Rolling Stones are deeply sorry for tonight’s postponement, but the safety of the audience, fellow musicians and the touring crew has to take priority,” wrote the statement.

Jagger himself took to Twitter to share a personal statement on the cancellation, apologising to fans for having to reschedule at the last minute.
“I’m so sorry that we’ve had to postpone the Amsterdam show with such short notice tonight,” the 78-year-old singer wrote. “I have unfortunately just tested positive for COVID. We aim to reschedule the date ASAP and get back to you as soon as we can. Thank you all for your patience and understanding.”

The Stones are due to perform in Bern, Switzerland next (17 June), though in light of Jagger’s health, it’s uncertain if that show will face postponement.
So far, the 2022 trek across Europe has taken the legendary rock band from Spain, through Germany and the UK, where they played their first show in Liverpool in over 50 years. The Stones also have plans to play Italy, Belgium, Austria, France, Germany and Sweden over the next month.
The Stones have been touring with drummer Steve Jordan, who replaces long-time member Charlie Watts after sadly passing away last year at the age of 80. The group have been paying tribute to the late drummer at their live shows.
The post Mick Jagger tests positive for COVID-19, Rolling Stones show in Amsterdam to be rescheduled appeared first on Guitar.com | All Things Guitar.