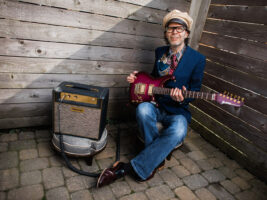 “Instructional videos can be boring. I’m always just trying to keep people from walking out the door!”: Paul Gilbert

You don’t really interview Paul Gilbert; you interview Paul and his guitar, because there’s not a moment of our conversation where the shred legend doesn’t have a guitar sat in his lap. It’s not just a visual presence either, for practically every question we ask the answer is peppered with musical examples, while Paul himself demonstrates himself to be a guitar jukebox – there simply doesn’t seem to be an iconic riff or melody that he’s unable to pull out of the hat, in the blink of an eye.

READ MORE: “I had to step up and pull out my small bag of tricks”: Steve Gunn ups his guitar game for sixth solo album, Other You

This amiable musical approach to life and a pure unadulterated love of guitar is what makes Paul such a respected tutor. Indeed, it’s this aspect of his profession that has kept him busy during the last 18 gig-less months. Since 2012, Paul has operated his own online Rock Guitar School, whereby students can study and exchange videos and have Paul critiques their playing then respond with his own video. It has proved enormously successful and has been running for almost a decade.

But the yearn to create is never fully kept at bay with Paul. However, recording a new album during a global pandemic was always going to be tricky for Paul given that he prefers to record live with a band. So, the only option would be to postpone recording until COVID related restrictions are lifted, right? Wrong.
Undeterred, Paul, a modestly accomplished drummer, keyboardist, and bass player, decided to pick up a set of sticks, a bass guitar, and a piano stool (not simultaneously of course) and lay down the entire rhythm section himself. A few short months later Werewolves of Portland was completed – Paul’s 16th solo album and arguably his most accomplished to date.
As ever, its difficult to pigeonhole stylistically: throughout the 10 tracks there’s elements of rock, pop, metal and everything in between, but at the forefront is Paul’s identifiable sense of melody, quickfire pentatonic lines, and the slide playing which has become a significant component of his technical repertoire in the last few years.

How on earth did you convince REH to include all those quirky ideas such as magician tricks and cheerleaders in a guitar instructional video?
“At first they were like there’s no way: you’re not gonna have time to edit this, it’s too crazy. This was before computers, so I shot everything: I had the whole thing mapped out in my head, and there was time code on the VHS tape. And I just watched everything and wrote down all the edit numbers, and then came in the studio and they were like, ‘I think we better book two days in the studio’, and we got it done in time for dinner. They couldn’t believe it! It really came together easily, just because I had nothing else to do! I didn’t have a girlfriend or a family; I just wake up in the morning and work.
“The cheerleaders really were great. I would ask them to do the phrase, then they’d like kinda have a meeting and say, ‘Okay, we could do this’ and they brought some creativity to it. Instructional videos can get boring, anything can get boring, so I’m always just trying to keep people from walking out the door!”
Werewolves of Portland is out now.
The post “Instructional videos can be boring. I’m always just trying to keep people from walking out the door!”: Paul Gilbert appeared first on Guitar.com | All Things Guitar.