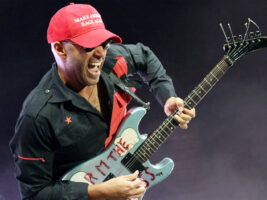 Tom Morello has collaborated with American alt-rock duo Phantogram on Driving To Texas, the second single from his upcoming solo LP, The Atlas Underground Fire.

Driving To Texas brings together Phantogram’s atmospheric, synth-driven sound with Morello’s rock guitar virtuosity.
“Sarah has one of the most haunting and beautiful voices of anyone singing today, and Josh’s production is stylistically so fresh and eerie,” Morello said in a statement. “This song is creepy as hell – a dark journey, a struggle for a tortured soul.”
Speaking about his approach to the track’s guitar soaring solo, Morello explained he wanted it to “feel like a vengeful angel who has come down to decide the fate of the protagonist.”

Driving To Texas follows Morello’s cover of AC/DC’s Highway to Hell which featured Bruce Springsteen and Eddie Vedder as guest vocalists. The single, which dropped earlier this month was the first from Morello’s upcoming LP.
The Atlas Underground Fire is set to feature a star-studded list of collaborators, which includes the likes of Chris Stapleton, Mike Posner, Damian Marley and Bring Me The Horizon. The album is due out 15 October and is available for pre-order now.
The post Tom Morello taps Phantogram for dark new single Driving To Texas appeared first on Guitar.com | All Things Guitar.