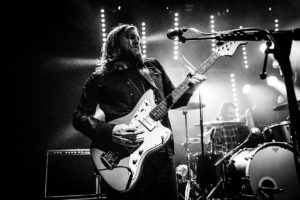 Formed in Southampton, Band Of Skulls have become a formidable hard-rocking trio, releasing fourth album By Default last year. We catch up with the band as they prepare to tour the US and Canada.
Interview Lars Mullen | Photography Rod Maurice
As a power trio, Band Of Skulls have been together for over 12 years, with Russell Marsden and drummer Matt Hayward first meeting at school almost 20 years ago, later drafting in Emma Richardson on bass.The post Interview: Band Of Skulls appeared first on Guitar & Bass.