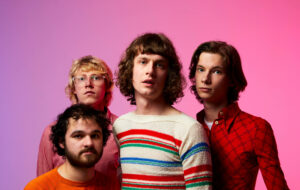 Can a band with two guitar players ever be considered too ‘rock’? Those were the early concerns of Tom Rees, the charismatic frontperson and lead songwriter of Buzzard Buzzard Buzzard, who to all intents and purposes, are a traditional, four-piece rock band.

When we sit down with Rees to discuss the band’s debut album proper, Backhand Deals, over a patchy Zoom call, we quickly cast his mind back to an early 7-inch the band released alongside another revered Cardiff band, Boy Azooga, upon which the Welsh scene got its first taste of the deep-rooted rock influence that engulfed the quartet for a few years. “When I was in my previous band, I was really afraid of the rock thing. It’s easy to think that it’s lame. Guys wearing sweatbands and that whole vibe. I don’t know what happened but as I got older, I just got less ashamed of liking it.”
Like many of us who came of age during the death throes of the indie-sleaze scene in the early 2010s, it’s easy to feel sympathy for this mindset. Rees says he did his utmost to convince himself that he too loved Foals, before finally admitting that his heart lay in the hands of one Angus McKinnon Young. “When we started this band, I think we took this position that honesty is the best policy, because I’d just been denying to myself that I loved AC/DC for so long!”

As is the case with many new and emerging bands and artists, honesty and confidence are more pivotal than either are given credit for. Each member of Buzzard Buzzard Buzzard – the band is rounded out by Zac White on guitar, Ed Rees on bass and Ethan Hurst on drums – exudes confidence and ability on stage. Rooted in the aforementioned AC/DC, their early influences came via Marc Bolan and T-Rex, John Lennon and Todd Rundgren. Nowadays though, they’re undeniably more diverse, leaning into soft-rock territory akin to Wings and shades of late 70s Fleetwood Mac, whilst also embracing the impressions made by their peers and local surroundings.
Confidence remains an important trope for Rees and his fellow Buzzards, referencing the late Joan Rivers standpoint on success as a key influence on their determination to succeed as a rock outfit. “I find a lot of parallels between being in a band and being a comedian. Joan Rivers said, ‘The key to being a successful comedian is who can stay out in the rain the longest.’ It’s very similar to that.”

For those about to soft-rock
Signing to the revered Communion in early 2020, Rees acknowledges the imprint’s ability to sniff out the good and great artists littered across the UK – from Catfish and the Bottlemen to Twin Peaks and Johnny Flynn – and is under no illusions that the band have found themselves with a label that can only aid their development. “From an ideological perspective, I was like, ‘I want to be on a label who represents bands that I like, because it feels like the right thing to do.’ I don’t think there’s many labels around that would allow a new artist to solely write and record their own debut album.”
The debut album in question is Backhand Deals, a concise and direct record that perfectly epitomises the band’s ethos and characteristics, both sonically and lyrically. Indeed, while the title screams ‘rock!’ there’s a depth that has developed over the band’s short career. Initially a joke title conjured up as a placeholder, they quickly decided to morph the songs around it, pushing Backhand Deals into an introspective body of work, expanding on their unrelenting need to reject the tired tropes of rock music.
Stemming from their single Crescent Man vs Demolition Man, a song about the destruction of Guildford Crescent, one of the oldest streets in Cardiff that housed the now derelict and eulogised Gwdihŵ music venue, Rees developed those ideals and leant into more political storytelling.
Image: Elijah Lewis Thomas
“I was trying to write a lot of false love songs when I was in bands before, about people that I never knew nor existed. I think everybody listens to The Beatles and goes, ‘They did it, so I should do it.’ There wasn’t enough for me to be able to carry the ideas with conviction.
“We had the name before the record. I was in a position of writing into it, which was a really interesting perspective. It’s a very broad statement [the title], but I want it to be about localised issues and localised behaviour. I think that comes from our perspective that we don’t want to move to London and become a fucking indie band, because I think that whole idea of big cities is just dead.”
Rees admits that following the release of John Lennon Is My Jesus Christ, the responses and accusations of becoming a glam rock pastiche scared them into expanding their repertoire, if nothing else to ensure “people don’t write us off like Greta Van Fleet.” His conviction is admirable, and their newfound progressive lyricism has allowed Buzzard Buzzard Buzzard to develop their early influences into the carefully crafted, albeit fiercely steadfast, outfit they are today.
Image: Lily Brown
Eclectic Warrior
Backhand Deals was produced and recorded by Tom Rees mainly at his small studio in Cardiff, and when questioning this decision his knee jerk reaction is to laugh and consider himself an egomaniac. Digging deeper, Rees quietly admits that he’s happy to relinquish control when necessary, and his role as de-facto producer is purely down to its benefits as a songwriting tool.
“I’m a massive fan of giving away control in other circumstances, but from the perspective of production, it feels like another tool that allows me to be creative in terms of songwriting. It’s hard for me to get excited about something I’m writing on an acoustic guitar.”

A sought-after producer and mix engineer, Rees has worked with a plethora of emerging artists from Wales and the wider UK, including The Bug Club, Panic Shack, and more established acts like Swim Deep. So, what does he say to artists that go to him for work? “I’m a hypocrite,” he laughs. “A fucking money hungry, capitalist hypocrite! I’ve worked with a lot of people who have come to me and said, ‘Actually, I want to do it myself’ and all power to them. It’s an enriching thing to do.”
Even the guitar partnership on Backhand Deals is one that’s rooted in classic rock, albeit escaping via the influence of 21st century art rock. Whilst Tom is an avid if unsurprising user of SGs, fellow guitarist, Zac White, is devoted to his Jazzmaster, thanks in part to his love of Wilco. “He will just not let it go,” Rees jokes. “He feels the same way about Jazzmaster as I do the SG.”
Image: Elijah Lewis Thomas
Rees admits they never thought how the SG’s trio of humbuckers would complement the Jazzmaster, instead working within their own tastes and forcing the partnership to develop. “Again, from the position of honesty,” he says, “it was a case of Zac likes to play this [Jazzmaster], so we make it work. It could be a Harley Benton and we’d have to make it work.”
Rees’s upgrade to a Gibson SG wasn’t as effortless as his on stage guitar prowess, however. After seeing live footage from the late 70s of Angus Young playing a black model with a white pickguard, he soon realised it was imperative he also had an SG in that colourway. He turned to Gumtree and found a 1980 model, which resulted in a stand-off with the seller. “The dude was very strange, he thought I was trying to scam him at first,” Rees reveals. “He stopped all contact, I tried to call him… I even considered going round his house!
“I had to remove the Hetfield pickups that were installed and put the stock ones in. I bought my Epiphone for looks, but I couldn’t turn the volume down. All three pickups are on all the time!” While that maybe “rock as fuck” as Rees puts it, it’s not the most versatile of setups. His goal, he says, is for total control of his volume control and as little pedals on the floor as possible. Just the guitar and his beloved JCM800.
With the band’s guitar playing dexterity now fully realised, Backhand Deals sees more integration of piano and keys-led songs than on their Non-Stop EP. Originally a drummer by trade, Rees admits he sees both piano and percussion as broadly the same thing, allowing his piano work to present itself naturally as a rhythm section.
Image: Elijah Lewis Thomas
“I’m a huge Steely Dan fan,” he declares. “So it’s supplementary. There’s all this amazing guitar work with keys in the background. Kev from Communion also plays in Bear’s Den, and we borrowed loads of guitars from him. Like this killer 335 from 1962,” Rees enthuses, eyes widened. “We used all these 60s Gibson guitars, a ’69 SG, this heavy Les Paul, like dark matter heavy! We focussed on getting well rounded, powerful guitar tones with low end that doesn’t sound boxy.
“My pursuit of anything in the production realm is to make it sound as pro as possible, as anti-DIY as possible. The last thing I want is for it to come across as a guy in his bedroom. The 335 was particularly great for that. You got a real feeling for the quality of the instrument before even plugging it in.”
Rees’s vision of production is perfectly in line with Backhand Deals. A considered, direct and thought-provoking debut, it’s an album for those who never wanted to admit they love rock music, eased by its quietly pivotal everyman undertone. Stadia await.
Backhand Deals is out now on Communion.
The post Introducing… Buzzard Buzzard Buzzard: Learning not to be afraid to rock and embracing social consciousness on their long-awaited debut LP appeared first on Guitar.com | All Things Guitar.