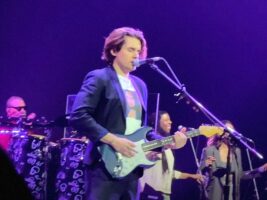 READ MORE: “The Strat is the most iconic electric guitar”: Cory Wong on channelling the magic of Strats into his new signature guitar

Mayer was giving a live rendition of Still Feel Like Your Man from his 2017 album, The Search For Everything.
According to the fan who uploaded the footage, the performance was filmed early on Mayer’s 2022 tour for Sob Rock, at the Well Fargo Centre in Philadelphia, Pennsylvania.
Watch the full performance below:

Mayer had to push back the next four dates of his Sob Rock tour – in Pennsylvania, New York and Michigan – to May after testing positive for COVID-19 for the second time.
“Whelp. More members of the band tested positive for COVID today, and I was one of them,” announced the singer-songwriter in a tweet on 25 February. ”This means we have to reschedule the next four shows, which we’ve already rescheduled and posted above. I’m so sorry to make you change your plans.”

Whelp. More members of the band tested positive for Covid today, and I was one of them. This means we have to reschedule the next four shows, which we’ve already rescheduled and posted above. I’m so sorry to make you change your plans. https://t.co/60SzykxPK3 pic.twitter.com/KiGvO8tQGc
— John Mayer (@JohnMayer) February 25, 2022

Mayer first tested positive for COVID-19 in January 2022, when he was due to perform with Dead & Company at the Playing In The Sand 2022 concert vacation in Cancún, Mexico. Additional COVID-19 cases amongst artists and staff meant the event was totally called off in the end, with refunds sent to ticket purchasers.
In other John Mayer news, PRS finally released the SE version of his Silver Sky signature model, which Guitar.com took for a test spin last month. In our review, we called it “a hell of a guitar that could easily be any player’s first choice.”
Meanwhile, we also spoke to Cory Wong about the making of his signature model last year, which pays homage to the blue Fender Strat he’s been playing since he was a teenager.
“When you play a guitar long enough you learn to adjust to its nuances – to compensate even just a little bit as you learn your instrument. With this guitar there is no need for that,” Wong told us. Read the rest of our interview here.
The post John Mayer funks out onstage to Still Feel Like Your Man on a Cory Wong signature Strat appeared first on Guitar.com | All Things Guitar.