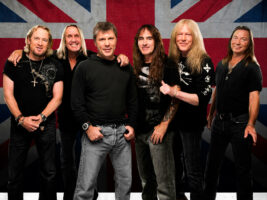 Iron Maiden release The Writing On The Wall, their first new song in six years

Iron Maiden have returned with The Writing On The Wall, the legendary British metal band’s first new music in six years.

The Writing On The Wall arrived yesterday (15 July) alongside an animated music video full of references to the band’s discography and canon. It was produced in a collaboration with former Pixar executives Mark Andrews and Andrew Gordon, director Nicos Livesey and animation studio BlinkInk.

Frontman Bruce Dickinson expressed his excitement at how the music video turned out, saying it’s “more like a mini-film, really”.
“I had a pretty clear idea of the concept to accompany the song and when I met Mark and Andrew,” he said in a statement. “On Zoom, it quickly became clear we were all very much on the same wavelength, and this was reinforced with the addition of Nicos and his young BlinkInk team.”
He continued: “I knew it was going to work out as soon as Mark brought my treatment to life with his incredible storyboards. I thought we could make something very special together. I think we did and hope our fans will agree. In fact it’s pretty much created by Maiden fans!”
The new single could mean that a 17th studio album from Iron Maiden is nigh. The band’s last LP, The Book Of Souls, was released back in 2015.
The post Iron Maiden release The Writing On The Wall, their first new song in six years appeared first on Guitar.com | All Things Guitar.