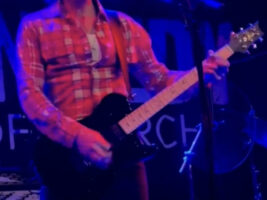 Is PRS about to release a Telecaster-shaped electric guitar?

Could it be possible PRS is about to drop another Fender-shaped instrument? Myles Kennedy onstage strapping on a mysterious new T-type says maybe.

READ MORE: The Big Review: PRS SE Silver Sky, one of the world’s most popular guitars gets a budget-friendly variation

Eagle-eyed fans on The Gear Page forums spotted Kennedy with the guitar in an Instagram post of the rocker performing in Hamburg, Germany on 1 June.
“I’m not even a Tele lover, but if PRS releases a Tele that’s as good as the Silver Sky, the Tele world will never be the same!” wrote thread starter DreamTheatreRules. “Is PRS about ready to release the greatest Tele ever? Or is this a one off custom made for an artist?”
Kennedy’s Telecaster appears to sport the same back-angled reversed PRS headstock that appears on the Silver Sky, along with what looks like a Narrowfield pickup.

Now, it’s entirely possible too that the rocker took to a workbench and put the guitar together himself – in other words, no official word from PRS has dropped on the guitar just yet.
However, it’s hard to ignore the fact that, if a PRS T-type were to be official, it would be the second Fender-esque instrument put out by the brand, following John Mayer’s Strat-like Silver Sky signature.
Mayer himself admitted back in 2018 that the Silver Sky was heavily inspired by the Stratocaster, but was more “hyper expressive” and “higher definition” – he added that his thought process for the guitar was essentially “what would the [Stratocaster] be like, if it was designed now instead of in 1954?”
Reverb.com revealed last year that more Silver Skies were sold on its platform than US Fender Stratocasters, though Fender’s Made-in-Mexico line of Stratocasters and Telecasters topped the list.
The post Is PRS about to release a Telecaster-shaped electric guitar? appeared first on Guitar.com | All Things Guitar.