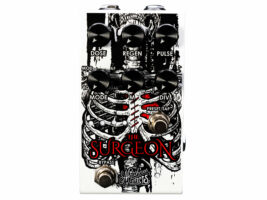 Matthews Effects has announced the Surgeon V2 delay, which is said to pack advanced features while still being accessible for plug-and-play.

READ MORE: Is PRS about to release a Telecaster-shaped electric guitar?

The Surgeon V2 boasts several unique features, including an expression jack that controls all parameters via expression and can determine start and end points for expression sweeps, the ability to save 127 presets which can be controlled using a MIDI In/Out connection, which will give users full control over the delay while using a MIDI controller.
The Surgeon V2 can also be connected to a full computer editor via USB that allows users to install firmware updates and create and organise presets, though users are not required to download the editor to use the delay. Users should note that while the Surgeon V2 can function with only the USB connection when connected to a computer, the USB-C post cannot provide enough power for the delay during actual usage.
The delay also features eight different algorithms divided into 4 categories, namely EQ, Mod, AF, and Dual. EQ gives the user two different EQ’d delays that occur in the feedback loop instead of in the delay, while Mod comes with Depth mode presents a fixed speed for the modulation LFO set by Matthews and allows the user to adjust the depth of the modulation effect on the delay. Rate mode reverses this concept with a set optimum depth and adjustable LFO rate.

Holding down the bypass footswitch will engage the Ramp feature, which set to the “Regen” control by default and will be implemented at maximum settings when the footswitch is held down, and gradually return to the point that the Ramp began. All controls on the Surgeon V2 can be ramped with set ramp end points, and multiple parameters can be used simultaneously.
The Surgeon V2 delay can be ordered at the current price of $249.99 not inclusive of shipping and tax.
More information can be found at Matthews Effects website.
The post Matthews Effects Surgeon V2 delay has an expression jack and a full computer editor appeared first on Guitar.com | All Things Guitar.