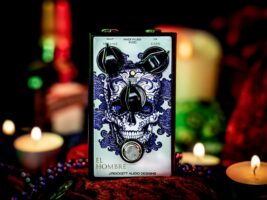 J.Rockett has announced the release of a new overdrive pedal, the El Hombre.

READ MORE: The Big Review: Chase Bliss Habit Echo Collector – Is this the most creatively glitchy delay pedal ever?

Based on the tones of the Texas legend Billy Gibbons (ZZ Top), the El Hombre is inspired by the Tres Hombres and Fandango! albums. The pedal is stated to capture the nuances and touch sensitivity of an amp, while producing classic bluesy tones made famous by the guitarist.
The pedal features three controls, volume, gain and bite, with the bite control giving you the freedom to alter the drive style, producing a more aggressive style when turned up and a smoother tone when turned down.
With top-mounted connections, this pedal displays a very dynamic overdrive, with what J. Rockett describe as “THE Texas Blues tone”.
In a statement, J. Rockett has said: “The El Hombre was sort of a happy accident if you will. We were heavily listening to early ZZ Top records at the time such as ZZ Top’s (First Album), Tres Hombres and Fandango. This was right around the time we lost Eddie Van Halen (R.I.P).
“We had learned how influenced Van Halen was by ZZ Top and we were truly listening to the music to hear those influences. It was quite remarkable how you can hear similarities not only in the guitar but in the backing vocals and the overall vibe of the music.”
J. Rockett was first formed in 2006, and this marks the first pedal since the release of the Analogue Bucket Brigade in 2021.
The post J.Rockett announces the El Hombre appeared first on Guitar.com | All Things Guitar.