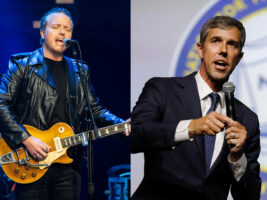 Singer-songwriter Jason Isbell has teased the release of a cover album of Texas bands if Democrat Beto O’Rourke’s recently-announced run for governor of the state is successful.

The promise mirrors one Isbell made last November, when he pledged: “If Biden wins Georgia [in the presidential election] I’m gonna make a charity covers album of my favourite Georgia songs.”
Biden did indeed win the state, and Isbell made good on his word with the covers record Georgia Blue, with covers of songs by REM, Cat Power, Otis Redding, Gladys Knight and the Pips, The Allman Brothers Band, James Brown, Now It’s Overhead, Vic Chesnutt, and more. It was released for charity, with proceeds going towards the non-profits Black Voters Matter, Fair Fight and Georgia Stand Up.
When O’Rourke announced his bid for Governor yesterday (15 November) on Twitter, Isbell responded by saying: “You need a singer for anything, you just call.” Shortly afterwards, a fan replied to ask Isbell if he would repeat his feat from last year, writing: “If he wins, do we get a Texas covers album?”
Isbell confirmed, saying “You know what, hell yes.”

Producer Steve Albini then joined the conversation, offering to donate studio time for the recording sessions and engineer the project. He then made some requests for the tracklist, including Bubble Puppy’s Hot Smoke & Sassafras, Glass Eye’s Dimsey Naish, and Roky Erickson’s Two Headed Dog.