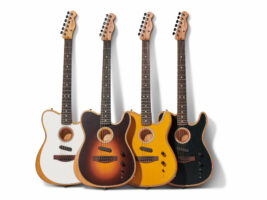 Fender’s Acoustasonic Player Telecaster is a cheaper, simplified version of the Acoustasonic

Fender has unveiled its new Acoustasonic Player Telecaster, a stripped-back and more affordable entry into its hybrid range of Acoustasonic guitars.

The new Acoustasonic Player Telecaster’s streamlined nature is mainly born out of its new electronics. It still features the Fender and Fishman-designed pickup system, as well as a Modern N4 Noiseless single-coil that offers acoustic and electric voices, respectively. However, instead of a five-way voice-selecting blade switch, there’s now a three-way switch. In the forward position, you have acoustic sounds. In the rear, you have electric sounds. And in the middle, you have a blend of the two. These three modes each have a pair of voices, for a total of six sounds.
Another change is the way these electronics are powered. Rather than using a rechargeable lithium battery, the Player Acoustasonic Telecaster uses a standard 9V battery.
Construction is similar to the previous Acoustasonic modes, albeit with rosewood rather than ebony for the fretboard and bridge. There’s still the unique ‘waterfall’ soundhole, forearm contour and scalloped neck heel for playing comfort.
Image: Fender
The guitars are being produced in an entirely new facility in Ensenada, Mexico, which stands right next to Fender’s main facility, which produces its other Made-in-Mexico guitars.
Ed Magee, Fender’s executive vice-president of operations, said of the change: “The expansion of the Ensenada factory has been a 26-month long journey but one that’s been completely necessary to make Acoustasonic technology available to a widespread audience of players around the world.
“We have an incredible depth of engineering, operations and guitar building experience in Ensenada and this investment gave the team an opportunity to tackle a brand-new guitar manufacturing process to meet the growing creative needs of our players.”
Another major change for the Player version of the Acoustasonic Telecaster is the price. It launches at £1,049, €1,199 or $1,199.99, about $700 less than the first Acoustasonic.
Hear it in action with the first episode of the new series of Versatile By Design, Fender’s video overview and showcase of the Acoustasonic range.

Find out more at fender.com.
The post Fender’s Acoustasonic Player Telecaster is a cheaper, simplified version of the Acoustasonic appeared first on Guitar.com | All Things Guitar.