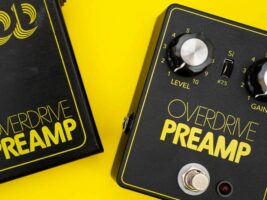 JHS Pedals has introduced the Overdrive / Preamp, a new guitar pedal that’s based on a mythical pedal that supposedly preceded the legendary DOD 250 overdrive.

Introducing the pedal, JHS pedal’s Josh Scott first laid the groundwork of its unique origin story. “In 2019 I stumbled across a pedal that didn’t exist,” he begins. “Yeah, cue the Twilight Zone theme song. It was a DOD Overdrive / Preamp that predated the ‘Grey Box’ 250 pedals that everyone – myself included – had assumed were the first version ever made. The pedal was encased in a large grey folded metal enclosure that resembled Electro-Harmonix more than DOD, and it was conspicuously lacking the ‘250’ model number.”
Scott goes on to explain how, to his discerning eye, the pedal bore the hallmarks of a vintage DOD unit, despite the different typeface and DOD logo. “It still had the same charm and quirky feel of the vintage 1970s DOD. The sticker on the pedal’s backplate said “DOD Electronics Company” and listed the home address of founder David Oreste Di Francesco, as well as a number: 75.”
Josh then managed to track down David, and found out he had obtained the 75th DOD pedal ever made, and one of the first ten DOD Overdrive / Preamps ever sold. “For a pedal historian,” he writes, “it was the equivalent of uncovering the Dead Sea Scrolls.”
JHS’ Overdrive / Preamp is a faithful recreation of this incredibly rare unit. It’s a rather unassuming box, with only two controls: level and gain. There’s also a toggle switch to choose between two separate clipping modes, one based on Scott’s initial #75 pedal and the other based on another early big-box DOD pedal he acquired.
While the core of the circuit is faithful to the original, there are a couple of tweaks made to bring it up to modern spec – mainly in terms of the volume control, which now offers a lot more signal boost.
In comparison to a standard DOD 250, Scott describes the difference thusly: “This ‘Big Box V1’ DOD 250 circuit definitely feels like a 250, but with a few changes: more gain/grit overall and more unique low/mids.”
The pedal lists for $179, and has been launched as a non-limited production model. Find out more at jhspedals.info.
The post JHS recreates a DOD overdrive that never was with new Overdrive / Preamp appeared first on Guitar.com | All Things Guitar.