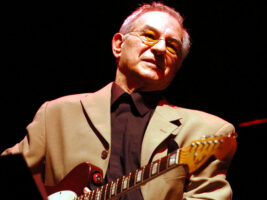 Joe Messina, guitarist for the Funk Brothers, has died. He was 93.
Messina’s cause of death has been reported to be kidney disease, which he had been battling for 12 years. He died at the home of his son, Joel Messina, in Northville, Michigan.
The Funk Brothers were Motown’s in-house studio band, with Messina being one of the most prolific members, playing on hundreds of recordings across his career. Names that Messina worked with include Diana Ross And The Supremes, the Temptations, Marvin Gaye, the Four Tops, Stevie Wonder and Smokey Robinson And The Miracles. While the band’s guitar arrangements changed, most often Messina was flanked by fellow guitarists Robert White and Eddie Willis.
While the band were often uncredited for their work, their contribution to the sound was featured in the 2002 documentary Standing In The Shadows Of Motown. He was also among the 13 musicians acknowledged by the Recording Academy in 2004, when the group was given a Grammy lifetime achievement award.
In addition to his son, Joel, Messina is survived by his daughter Janice Coppa, four grandchildren, and five great-grandchildren.
Robin Terry, CEO and chairwoman of Detroit’s Motown Museum, paid tribute to Messina in a statement, saying: “As one of the original Funk Brothers, Joe Messina leaves a lasting legacy as one of the creators of the Motown sound.
“A powerhouse talent, he was personally recruited by Berry Gordy and made a massive impact during the label’s most formative years. We are thinking of his family and fans, and will continue to celebrate his musical contributions for generations to come.”
The post Joe Messina, Funk Brothers guitarist and cornerstone of the Motown sound, dies aged 93 appeared first on Guitar.com | All Things Guitar.