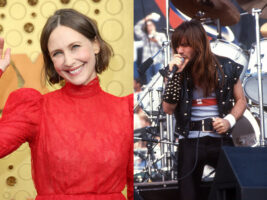 This was most definitely not on our 2022 bingo cards but we’re thrilled that it happened: Actress Vera Farmiga has belted out a cover of Iron Maiden’s The Trooper alongside the one and only Scott Ian of Anthrax.

READ MORE: Fender PO-220E Review: Is This The Best Budget Acoustic Fender Has Ever Made?

The actress best known for her roles in The Conjuring horror film universe, as well as Orphan and The Boy In The Striped Pyjamas, took to the stage at Rock Academy – a New York-based school for young people looking to get into music, particularly through rock and metal.
You may also be able to spot not only Anthrax’s Scott Ian but also her husband Renn Hawkey, keyboardist of metal band Deadsy, to whom she’s been married since 2008.
As she belts out the lyrics of “so when you’re waiting for the next attack, you’d better stand, there’s no turning back,” she punches the air in front of her as Scott Ian looks thrilled.
Farmiga posted the full video to Instagram where she wrote, “Sometimes @RockAcademyOfficial lets the adults ROCK too. And sometimes, if you’re really lucky… you get to rock out with @scottianthrax.” You can watch the full performance of Farmiga owning the stage below:

In the crowd, someone can be seen waving around a Ukrainian flag in support of the country. Farmiga herself is of Ukrainian heritage and has been proudly supporting the country during these difficult times.
We’re not sure how we missed Vera Farmiga’s love for a good guitar riff and a bit of headbanging but we’re in full support of it. And if this has got you in the mood for some Iron Maiden, they’re heading out on tour following their most recent album, Senjutsu, and you can get your hands on tickets here.
The post Watch horror actress Vera Farmiga belt out Iron Maiden’s The Trooper appeared first on Guitar.com | All Things Guitar.