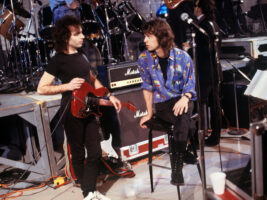 Guitarist Joe Satriani has recalled how, when he was playing alongside Mick Jagger, the Rolling Stones frontman would often perform surprise sets in tiny venues – quite the change from the enormous stadiums the band could easily fill.

Speaking to Ultimate Classic Rock, Satriani explained that Jagger “loved” playing sets in smaller venues. “It seemed like once a month we would find a bar somewhere and we would make a deal with the local band that we would just walk in and take over their gear. And if we needed to bring an extra guitar, we would. But pretty much we plugged in to whatever they had.”
“It was always great, just to see Mick turn it on when he’s literally 12 inches away from the audience,” Satriani added. “And they can touch him and everything. He loved playing blues songs and rock and roll favorites and stuff. We all got a kick out of it.”
“The whole thing was crazy, because we’d pull up in these SUVs all clandestine like, you know, because of Mick. He’s such a famous person he had to be handled very carefully. But he loved it, he just loved being with people. He loved performing and to just stand next to him while he exuded this positive rock and roll energy was just, oh man it was worth every second. It was just amazing.
“I stood next to him on the stage at the Tokyo Dome in front of 95,000 people and in front of this little club where people, where there couldn’t have been more than 80 or 100 people, totally packed into this teeny thing.
“The stage was about six inches high. He loved it though, doing Little Red Rooster in a little club like that, everyone’s drinking and having a great time. It was fun. We’d go in there, play for 45 minutes and run out. And then go have a party back at the hotel!”
Satriani has just recently announced his latest studio record, The Elephants Of Mars. The new LP will be released on 8 April, and was recorded remotely over the last two years of the pandemic. According to Satriani, this environment removed all of the time constraints from the project: “We did everything. We tried the craziest ideas. And we entertained every notion we had about turning something backwards, upside down, seeing what could happen,” he said.
The post Joe Satriani recalls playing in tiny venues with Mick Jagger appeared first on Guitar.com | All Things Guitar.