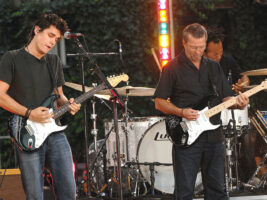 John Mayer has said that his Sob Rock track Last Train Home came from his desire to have played on Eric Clapton’s late-1980s album Journeyman, which marked a move to a cleaner, chorus-soaked guitar sound.

When Asked by Guitar World about how Last Train Home wears its influences on its sleeve, Mayer said he wanted to make the lineage of inspiration clear as he has a “deep dislike of dishonesty when it comes to creating.”
“I always wished that I could have a song that was on Eric Clapton’s Journeyman album,” he explained. “I loved him so much that I’m not afraid to go, ‘I just want to feel what that’s like…’”
“That,” in this case, was “plugging a Strat with noiseless pickups into a Soldano with a chorus pedal.”
Journeyman, released in 1989, arrived to relative critical praise. Robert Christgau noted that Clapton’s guitar especially embraced a more contemporary, cleaner sound – resembling Mark Knopfler’s tone. Journeyman was viewed as a return to form following 1986’s August, which received middling reviews and divided opinion with its focus on R&B rather than blues-rock.
Mayer explained further that he was happy to express his love for this era of Clapton because “Eric has always been someone who turned his tet around and showed you his notes. Every single time: ‘I got this from that person, I got this from him. I got this from her.’”
This is an attitude Mayer wanted to continue himself. “I’m at an age where I’m looking back and I’m really joyously reminiscing about times in my life as a listener, and as a music lover. And I’m going, ‘Well, why can’t I just ignite that spark on this one song?”
The video for Last Train Home is as explicitly 80s-influenced as the music: you can check out the track below.