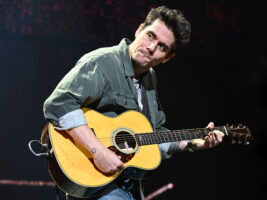 John Mayer has confessed he likes playing guitar naked after sex “with a little gut hanging over”, explaining that it’s a “very memorable” experience for a partner.

Should you ever find yourself in the position of being John Mayer’s lover, you may well find yourself witnessing a post-sex musical treat – Mr. Mayer sitting naked, with guitar in-hand ready to serenade you.
In a new interview with Alex Cooper on the Call Her Daddy podcast, Mayer explained how he sometimes plays guitar for his partners after they do some, well, Love On The Weekend.
“You should never play guitar to have sex with someone, but a little naked guitar playing after is very memorable,” he said. Host Cooper of course chuckled as he explained, “With a little gut hanging over, sitting Indian-style on the edge of the bed. It’s nice! … I like seeing the way people fold up all weird when they sit up. No matter who you are, you look weird when you sit up. And it’s cute.”
Mayer has been in several relationships with A-list celebrities, and also revealed in the interview that he no longer goes on dates. “Dating is no longer a codified activity for me, it doesn’t exist in any kind of… it’s not patterned anymore,” he shared. “I don’t really date, I don’t think that I have to, to be quite honest. I quit drinking like six years ago, so I don’t have the liquid courage, I just have dry courage.”
Mayer confirmed back in August that his hit track Walt Grace is being developed into a film, “I want to say one thing that’s going to get me in trouble because that’s what I do,” he said after performing the track. “That song [Walt Grace] is soon to be a major motion picture. It’s true. It’s true. It’s going to be a movie.”
You can watch the episode below:

The post John Mayer says playing guitar naked after sex “with a little gut hanging over” is “very memorable” for a partner appeared first on Guitar.com | All Things Guitar.