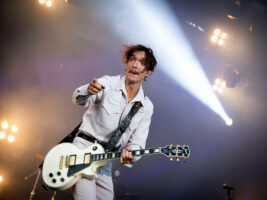 The Darkness’ Justin Hawkins calls pop music “sewage”, says he has to be careful when discussing it on YouTube channel

Justin Hawkins of rock band The Darkness has discussed his dislike for pop music, and opened up on how his popular music-orientated YouTube channel helped him to earn a living during the pandemic.

READ MORE: Bob Dylan says one of Duff McKagan’s songs “has profound meaning for me“

Hawkins began the channel, titled Justin Hawkins Rides Again, during the COVID-19 pandemic as a way to make money. His channel features music reviews, lyrical analysis, and deep dives into the nuts and bolts of songwriting. Since its launch, Hawkins has earnt over 300,000 subscribers.
In a new interview with Skin of Skunk Anansie on Absolute Radio, Hawkins discussed his YouTube channel in-depth, revealing he has to be careful when discussing pop music due to his strong dislike.
“Sometimes I worry that I just come across as the old man shouting at a cloud. You know, that whole thing of, ‘Oh, well, when I was young, you had to be able to play your instrument,’ and all that sort of stuff. So I try and avoid those tropes,” he said.
“But… the times when that becomes something that I need to be really careful of, is when I’m talking about pop music. Because I think pop music has always been just sewage; like a waist-high sea of nothing. You know, it’s vacuous, meaningless stuff that doesn’t move people like you and I,” he told Skin.
He also explained during the interview that before his channel, he started out offering tutorials and zoom calls with people on membership business website, Patreon: “And that was because when COVID started, I was just in this house and I had no furniture… For lots of different personal reasons, I ended up in this weird situation where I couldn’t work, I was on my own and struggling a bit, emotionally and also financially,” he explained.
Hawkins performed with Wolfgang Van Halen at the Taylor Hawkins Tribute Concert back in September, which honoured the Foo Fighters drummer who sadly passed away in March. He talked further about the experience in the video below:

The post The Darkness’ Justin Hawkins calls pop music “sewage”, says he has to be careful when discussing it on YouTube channel appeared first on Guitar.com | All Things Guitar.