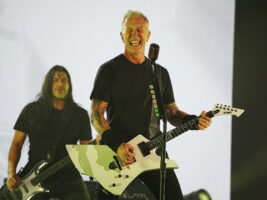 Metallica mess up on live debut of Lux Æterna: “That’s the radio edit”

Metallica have played their brand new single Lux Æterna live for the first time, and it didn’t start off so smoothly.

The band are set to release their brand new record, 72 Seasons in April, and dropped the new single just last month (November) which frontman James Hetfield described as “a sharp blast that distils 40 years of Metallica into three and a half minutes.”
The rockers are set to embark on a world tour across 2023/24, but have made an appearance for a sold out charity concert before the end of the year. The show was set up to raise funds for the All Within My Hands foundation, and took place at the Microsoft Theater in Los Angeles on the 16 December, where they played the new single live for the first ever time.
“We thought as this is such a special gig here that we’d play Lux Æterna,” Hetfield said. Just before the band erupted into the track, he joked, “God help us all”. Drummer Lars Ulrich began to hit a cymbal, shortly followed by the rest of the band joining in on their guitars, when he stopped drumming and stood up shaking his hand to signify a problem.
As he stopped playing the rest of the band turned to see what was going on, with guitarist Kirk Hammett looking particularly perplexed.
Before the band gave it their second attempt, Hetfield said, “that’s the radio edit” and “the drums are not to my liking”, playing off the mishap. Thankfully though, the second time around sounds great. Take a look at the full performance of the track below:

During the gig, Hammett showed off several new custom guitars from his collection including two Fender American Acoustasonic Jazzmasters, his upcoming signature Gibson Flying V, and an LTD Ouija Eclipse acoustic by ESP.
The post Metallica mess up on live debut of Lux Æterna: “That’s the radio edit” appeared first on Guitar.com | All Things Guitar.