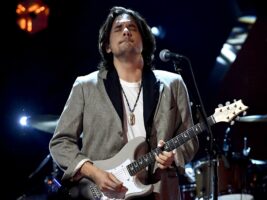 John Mayer has tested positive for COVID-19 and has cancelled his appearances with Dead & Company for the Playing In The Sand festival 2022 in Cancún, Mexico.
Mayer’s diagnosis was revealed by Dead & Company in an Instagram post earlier today (6 January) which announced that the band would be muscling on without Mayer on six-string duties.
“Today, just prior to leaving for Mexico, per his physician, @JohnMayer tested positive for COVID-19 and will be unable to perform at the upcoming ‘Playing in the Sand’ event in Riviera Cancun January 7-10” wrote the band in their post. “The weekend will now feature Dos Hermanos con Amigos: @MickeyHart and @BobWeir with @JeffChimentiMusic and @Oteil_Burbridge, joined by @LuvrzLane, Tom Hamilton @trhjunior and including special guests and sit ins including @MissMargoPrice and others.”
They added that in these “unprecedented times”, fans can expect to hear “many rare and different tunes.”

Earlier this week, Grateful Dead drummer and founding member Bill Kreutzmann dropped out of the band’s shows in Mexico citing health concerns related to his heart. Doctor’s have instructed the drummer to “sit out” the band’s shows until the end of January.
“After a lifetime of playing special beats, it’s almost no wonder that my heart came up with its own idea of rhythm,” Kreutzmann quipped in a tweet.

ordering me to sit this one out.
As many of you know, I had some health issues this past fall. After a lifetime of playing special beats, it’s almost no wonder that my heart came up with its own idea of rhythm. All jokes aside, my doctor has ordered me to take it easy… (2/4)
— Bill Kreutzmann (@BKreutzmann) January 3, 2022

but in the interest of longevity, I hope you’ll understand.
I wish my brothers in the band the best these next two weeks and I look forward to meeting back up with them — and with you — before you know it. Please stay safe out there so that we can do it all again.
NFA, Billy
— Bill Kreutzmann (@BKreutzmann) January 3, 2022