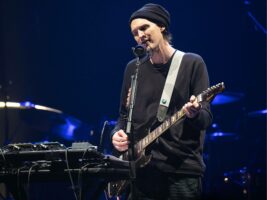 Ex-Red Hot Chili Peppers guitarist Josh Klinghoffer has opened up on the creative struggles he faced during his time with the band, claiming that he found the role “enormously stifling”.

Speaking with Guitar World, the guitarist reflected on his time in the band, admitting that he was surprised at the lack of experimentation the remaining members had when it came to making new music.
“I did a perfect 10 years with them, but for as much as I love those guys and loved playing with them, it was also enormously stifling, creatively,” he stated. “They’re an established band with an established sound, and I learned over time how little deviating from that was possible.”
During his decade-long stint as the main guitarist, the band released two studio albums, 2011’s I’m With You and the 2016 release, The Getaway. It was during this time that Klinghoffer states he originally tried to carve out his own distinctive sound, but was left feeling obligated to follow in his predecessor’s footsteps.
Admitting that he would try to avoid playing chords that sounded like “something John [Frusciante] would play”, Klinghoffer confessed that the other members were not willing to evolve their sound:
“As much as I thought they were up for experimentation, they generally stayed in their own lane” he adds. “I generally knew what they did and didn’t play, so I knew what to work on. Some songs from Stadium Arcadium I wasn’t familiar with on the guitar, but I knew [Blood Sugar Sex Magik] backward and forward.”
“I thought I was doing a good job writing with them, but it wound up not kind of becoming part of my story, or if it is part of my story with them, it’s a small part…”
In the time since his departure from the band in 2019, Klinghoffer has been working alongside Eddie Vedder as part of his latest solo album, Earthling.
Red Hot Chili Peppers released their first album back with John Frusciante, Unlimited Love, in April. Their second album of the year, Return Of The Dream Canteen, will be released this Friday (14 October).
The post Josh Klinghoffer claims being in Red Hot Chili Peppers was “enormously stifling, creatively” appeared first on Guitar.com | All Things Guitar.