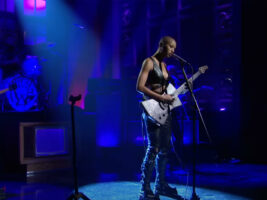 READ MORE: YouTuber builds guitar that tasers you when you hit the wrong note

Willow performed two tracks, Curious/Furious and Ur A Stranger from her new album Coping Mechanism on the live show, where she rocked out on her St. Vincent Ernie Ball Music Man.
In the two performances, she gets involved with some dual-lead guitar work and even smashes her guitar through a TV prop. You can watch both tracks being performed in the videos below:

Although Willow first made her musical debut as a child with pop hit Whip My Hair, she shot to success in the world of rock with the song Transparent Soul at 19-years-old which featured drumming from Blink-182’s Travis Barker and dominated social media app TikTok.
Since then, she’s collaborated with artists such as Avril Lavigne and Machine Gun Kelly, and continues to be a prominent talking point amongst guitarists and alternative music lovers alike.
In an interview with us at Guitar.com, she spoke of her passion for promoting inclusivity with her music: “I am always hoping to spread more joy,” she said. “I think the only reason why it’s older, white men mostly listening to this music is because metal has been gatekept for a long time by these people.”
“[Now,] new people of colour are coming to say that that’s really not the way that it should be,” she continued. “Rock is for everyone [and] I’m gonna bring my people to the space and we are gonna vibe it out like we always do… hopefully the old white dudes vibe it out too.”
Listen to more from Willow below:

The post Watch: Willow performs live on SNL, smashes guitar through a TV appeared first on Guitar.com | All Things Guitar.