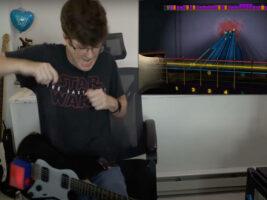 YouTuber Lightwing has built an electric guitar that punishes you with electric shocks if you hit the wrong note.

Through the power of AI and guitar-learning game Rocksmith, Lightwing managed to build a guitar that tasers its user if they mess up. In the video uploaded to YouTube, he said “I want to test if corporal punishment is still conducive in an educational environment by hooking up a taser to a guitar and trying to play music… That, or I’m a masochist trying to justify myself.”
To make this feature work, he explains that he “trained the AI with TensorFlow to detect misses in the game Rocksmith. Once the AI detects a miss, it will send a signal to an arduino which will flip a relay that will trigger a taser.”
You can view his process to bring the shocking (pun intended) creation to life and watch him take on Arctic Monkeys’ Do I Wanna Know? in the video below:

Overall, Lightwing concluded that involving shocks in his guitar learning journey did not spur him on to play better, who’d have thought? But this isn’t the first time a YouTuber has crafted a pretty wild guitar invention.
Over the years, we’ve seen people get creative in all sorts of ways including guitars made entirely of salt, coffee beans, and even skateboards. Just a few months ago back in July, we saw YouTuber Burls Art craft an insanely thin guitar, coming in with a body at just 19mm wide.
AI continues to not only help musicians learn to play, but has even enabled us to predict what historical guitar figures would look like in 2022 if they were still alive. Alper Yesiltas created a range of images titled As If Nothing Happened which was made up of AI portraits of Jimi Hendrix, Kurt Cobain, Elvis Presley and more.
The post YouTuber builds guitar that tasers you when you hit the wrong note appeared first on Guitar.com | All Things Guitar.